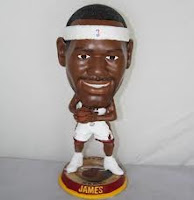 By Bob Gaydos
There was a story in the papers Monday about the smallest man in the world. No, not Lebron James, although I can understand the confusion. The official smallest man, according to Guinness World Records, is Junrey Balawing, of the Phillippines. Junrey turned 18 Sunday, qualifying him for the title. He is listed as 23 1/2 inches tall and weighs 12 pounds. Or just about the size of one of Lebron’s thighs.
When Lebron was 18, he was 6 feet 8 inches tall and weighed about as much as a football linebacker. He was on the cover of Sports Illustrated. He was the Chosen One. King James. Savior of the Cleveland Cavaliers, first pick in the NBA draft and heir-apparent to Michael Jordan.
On Sunday, Lebron played basketball like he was the smallest man in the word. Indeed, as the National Basketball Association championship series marched on to its conclusion. Lebron shrank inch-by-inch with each defeat for his Miami Heat until he was virtually invisible at the end of each game and a mere bobble head of himself at the end of the series.
Indeed, his shrinkage was made even more pronounced by the growth with each passing game of Dallas’ seven-foot giant, Dirk Nowitzki. Mr. Softee became Mr. Clutch. James just became irrelevant.
This is not about basketball. If it were, I would say that the Dallas Mavericks, a very talented group of players, were simply better at playing as a team than were the Miami Heat, which is true and rather important in a team sport. But this is one of those sports-as-metaphor-for-life moments. An allegory for all times and my favorite kind, because it involves sports, which, at most, are a pleasant distraction from all the other stuff. No one gets seriously hurt when Lebron James comes up small in the biggest game(s) of his life except maybe for some degenerate gamblers who should have known better than to bet the ranch on a classic narcissist whose life has been a testament to hubris. (Gotta love those Greeks.)
Took a while to get there, but that’s the life lesson. If you are told from childhood that you are special, you are bigger, faster, stronger and far better than others, that you can do no wrong, that you are, indeed, the Chosen One, it can be extremely difficult when something goes wrong (say, the other team wins a game your team should have won) to look at yourself in the mirror and say, “It’s my fault. I didn’t play hard. I didn’t lead. I didn’t do all I could have to win that game.” After all, you can do no wrong.
But behind the arrogance and exaggerated sense of self-importance present in the narcissist, usually lies an insecure individual with low self-esteem who has trouble dealing with failure or criticism. Because he has never been wrong -- or so he was led to believe -- he doesn’t know how to react when blame (for his team’s loss, for example) is laid at his feet.
Someone with a more realistic self-image who also happens to be a superstar (Michael Jordan, Kobe Bryant, Magic Johnson) will take it upon himself to do try to do better the next time and, if he fails, well at least he gave it his best shot. But a narcissist -- say someone who starts each game with arms outstretched messiah-like in a cloud of white powder -- can’t deal with failure, so he’s likely to avoid taking risks that could result in defeat. An Average Joe might blow off a job interview. A basketball player might avoid demanding the ball and taking important shots late in a basketball game, even when his teammates are counting on him to do so. Let Dwyane do it.
Unfortunately, for Lebron and his teammates, Dwyane Wade couldn’t carry the team this time. He tried and failed, which is no shame. It still put him one significant step ahead of Lebron.
As I said, this is no-harm, no-foul for most of us. Fans move on. The players get paid well and will try again next year. Young hero-worshippers learn a valuable lesson about clay feet and hopefully file it away for later in life.
For Lebron James, though, it will linger, despite his day-after bravado about moving on with life. There is a lesson -- actually several lessons -- in this painful public humiliation for the young man who held a nationally televised announcement to reveal that he was leaving Cleveland, where he was the unchallenged King James, and “taking (his) talents to South Beach.” To wit: You are never as good as the people who surround you say you are. No one is perfect. The Chosen One has yet to arrive. Showing up is 90 percent of life. Losing is not a disgrace; not doing your best because you’re afraid to be blamed for the loss, is. Humility is a virtue. And, not for nothing, hubris was considered a crime in Ancient Greece.
* * *
P.S.: Junrey Balawing got no cash from Guinness for his smallness, but he showed up for the ceremony, smiled a lot, got a plaque and a birthday cake and gifts from around the world. He seemed certain that no one, not even a star basketball player from America, would claim his crown.
bobgaydos.blogspot.com
Posted by Bob Gaydos at 4:25 PM