From God's lips to Michele's ear 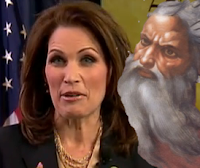 By Bob Gaydos
Good lord, does Michele Bachmann really believe that God is taking sides in the American presidential campaign? More to the point, does the Republican congresswoman from Minnesota expect us to believe that she knows which side God is on because she can interpret the messages He sends us in the form of catastrophic natural events?
It would appear so. The tea party darling, who has repeatedly demonstrated an appalling lack of knowledge of history or an understanding of science, has now offered American voters a glimpse of her evangelical Christian faith in which, apparently, God controls all natural events and directs them at certain people to deliver a message. Let the bodies fall where they may.
Speaking in Florida a few days ago, Bachmann said: “I don't know how much God has to do to get the attention of the politicians. We've had an earthquake; we've had a hurricane. He said, 'Are you going to start listening to me here?' Listen to the American people because the American people are roaring right now. They know government is on a morbid obesity diet and we've got to rein in the spending.”
So God punished the East Coast, home to those dreaded Democrats and liberals, with a rare earthquake and then a hurricane that killed 45 people and caused billions of dollars in damage because Democrats in Congress and the Democratic president would not go along with her views on how to fix the country’s financial problems?
Really? That’s all God has to worry about these days? Poverty and sickness and hunger and bigotry and religious fanaticism have all been dealt with, so let’s balance America’s budget? This is frightening on so many levels, even for Bachmann and, I might add, an insult to God.
Of course, Bachmann, as is her wont (and her habit) reacted to criticism of her comment by having an aide say it was only a joke. Oh, OK. Hear that Vermont? She was only kidding. You farmers who lost all your crops and you people whose homes were made unlivable, stop griping. Can’t you take a joke?
The thing with Bachmann is that she always has to backtrack on some dumb statement and always excuses it in an offhand manner as a meaningless misstatement or a joke. Which means she’s either dangerously clueless or -- the really dangerous option -- absolutely convinced that anything she believes is right and true and those who disagree with her are wrong and false. And, one may then assume, deserving of a vengeful God’s wrath until they are converted.
But she’s even got this God thing wrong. Disclaimer: I do not believe, as did the Greeks and Romans, that God, or the gods, are sitting around controlling natural events to reward or punish humans. But if one did believe this, then it would appear that conservative Republicans in the Deep South and Midwest, home of many fundamentalist religious zealots who support Bachmann and Texas Gov. Rick Perry, have not been heeding God’s messages.
The worst natural disaster by far in America this year has been the record-setting drought that has engulfed 13 states, all but one in the South and Midwest. The states of Alabama, Arkansas, Arizona, Florida, Georgia, Louisiana, Mississippi, New Mexico, North Carolina, Oklahoma and South Carolina -- homes to so many Republicans and true tea party believers -- have suffered for months with no relief in sight. Worst of all is Texas, where Gov. Perry has tried to out-God Bachmann in his presidential campaign. The outlying drought state? Alaska. How ya doin’, Sarah?
There’s more. Sixty-two tornadoes devastated Alabama on April 27. From May 22 to May 22, central and Southern states were hit by 180 tornadoes, with 177 killed, 160 in Joplin, Mo. alone. Cost: $4.9 billion. In all this year, Midwest and Southeastern states have been hit by about 750 tornadoes, causing more than 500 deaths and $16 billion in damage. There was also a hail storm that a did a billion dollars in damage in Oklahoma. God must have been really ticked at those Okies over something, no?
So, wasn’t anybody in these states listening to God when he told them to compromise on the debt crisis? Or was He telling them to take global warming seriously? I have to admit that, apparently along with Bachmann, I didn’t catch His meaning in these instances, but I did notice that all those states readily accepted help from the federal government to deal with the destruction of the natural disasters.
Actually, let’s keep this simple. If Michele Bachmann truly believes that God is punishing Democrats with lethal natural disasters for not agreeing with her on the budget, she hasn’t got the brains to be president. If she thinks this is a joking mater, she hasn’t got the heart.

bobgaydos.blogspot.com
Posted by Bob Gaydos at 12:02 AM