CPAC, Fidel and the hapless GOP 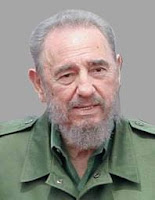 By Bob Gaydos
Do you get the feeling that a lot of Republicans just don’t like Mitt Romney? Or Rick Santorum? That they can’t make up their minds which one is less objectionable to the rest of the country? And does it seem like Republicans have finally got the true measure of Newt Gingrich and see that he really is the opportunistic, self-seeking, mean-spirited, vindictive blowhard that he sounds like every time he has an opportunity? And that, while they can abide Ron Paul, it’s only on days with an “R” in them?
It has been pleasantly quiet lately without a Republican presidential
“debate” every other day. No one shouting, “Liar, liar, pants on fire!” or “Hypocrite!” or, “Immigrant-lover!” or, worst of all, “Moderate!”
Yet the primary campaign drones on. Interestingly, the most apt description of this field of screams that I’ve seen comes from out of left field, literally: “The greatest competition of idiocy and ignorance that has ever been” is the way Fidel Castro (photo) put it when asked about the GOP primary campaign.
Yeah, I know all those dyed-in-the-wool, red-white-and-blue, flag-waving, commie-hating, God-fearing, apple-pie-eating, Chevy-driving, heterosexual, over-taxed Republicans who hate the government of the country they love probably don’t give a fig about what the former Cuban dictator thinks about their party. But it doesn’t mean he isn’t right.
That’s a bit of subtlety that seems to be lost on a lot of Republicans these days. When you live in a multi-cultural society, people will have differences of opinion. They need not be based in hate or expressed in hateful language. And people who are different from you may have different opinions on how to go about things. And they may sometimes be right. It makes it really important to learn how to work things out rather than shout ideas down. Too many Republicans don’t seem to get this.
Truth of the matter and Castro aside, a lot of Americans think the candidates the Republicans have put forth to run for president are an insult to the nation and an embarrassment for the party. And Sarah Palin isn’t even part of the conversation. However, her unsuccessful campaign for the vice presidency in 2008 may well have been the catalyst for what has transpired within the GOP: The Coup.
The party of Lincoln is clearly no longer the party of the likes of Rockefeller or Eisenhower or Bush I or Ford or Dole or, for that matter, Reagan. In fact, you hear almost as little about Double R as you do about Bush II from Republicans these days. Last week, the Conservative Political Action Committee held its convention to hear from the GOP candidates to decide where to put its money, which, according to the U.S. Supreme Court, is the same as its mouth.
Santorum, fresh off victories in Minnesota, Missouri and Colorado, where a handful of ultra-conservative Republicans bothered to show up and cast votes that don’t really count, confidently told the CPAC gathering, “Conservatives and Tea Party folk -- we are not just wings of the Republican Party, we are the Republican Party." Huzzah! Huzzah!
Then they voted to support Romney.
* * *
Another bit of news that cannot go unnoticed: With the GOP candidates mostly silent, the biggest noise of the week came from another group of conservative men -- the United States’ Catholic bishops. They felt obliged to give the rest of the country a lecture on sex and conscience. The bishops objected to an Obama administration plan that would require church-related institutions such as hospitals and schools to provide women employees with insurance coverage for contraceptives, free of charge. Churches themselves were exempt. More than 25 states already have such a law in place, guaranteeing that all women, regardless of religion or where they work, have access to free birth control, if they choose to use it.
The bishops, who have been looking for any issue on which to claim the high moral ground ever since paying off hundreds of millions of dollars in claims when priests around the world were discovered to be sexually abusing young boys, seized on objecting to probably the most effective method known to reduce the number of abortions -- free birth control. They weren’t even happy when Obama switched the cost to the insurance companies. Everyone was too polite to mention that the bishops didn’t consult any women in voicing their objection or that, according to a Guttmacher poll, 98 percent of Catholic women say they use some form of contraception to practice birth control or for other health reasons.
One assumes, they do so in what they obviously regard as good conscience, never mind common sense.
bobgaydos.blogspot.com
Posted by Bob Gaydos at 7:38 PM