Where have you gone, Joe DiMaggio? 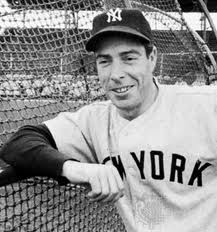 …and other (hopefully) thought-provoking questions

“The origin is from a famous partnership of Swiss comedy ice skaters, Werner Groebliand Hans Mauch, whose stage names these were. They came to public fame in the later years of a series of skating spectaculars called Ice Follies, promoted by Eddie Shipstad and his brother Roy, which began in 1936 and ran for almost 50 years. Their association lasted so long, and they were at one time so well known, that their names have gone into the language.

“Michael Mauch, the son of Hans, told me in a personal message about the origin of their names: ‘Frick took his name from a small village in Switzerland; Frack is a Swiss-German word for a frock coat, which my father used to wear in the early days of their skating act. They put the words together as a typical Swiss joke.’ ” Now don’t say you never learn anything when you read my column.

Now don’t be bashful, please. I would really appreciate comments, answers, jibes and japes (look it up on Bing) on any of the above. This is supposed to be an interactive medium, so interact, please. At the very least it will me make me feel good and at the most I may be able to get another column out of the replies. Isn’t that worth interacting?

PS: If you don’t know the Joe DiMaggio answer, look up Paul Simon. And shame on you.