Maybe there‘s a little addiction, disorder in all of us

Addiction and Recovery
By Bob Gaydos 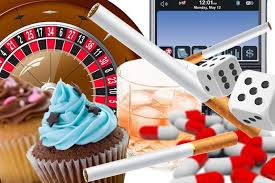 Opioids and alcohol get most of the attention, although marijuana, currently undergoing a reputation rehabilitation, has been grabbing plenty of headlines lately. But if you spend any amount of time studying the issue, it doesn’t take long to wonder if there isn’t an addiction, compulsion, behavioral disorder — call it what you will — for every human on the planet.
Some conditions are more serious than others, but all
either involve the brain’s reward system or relieve anxiety, stimulate compulsive use and bring with them an opportunity for negative consequences. Consider the following an inventory of sorts, a look at some of the substances people use or behaviors they engage in, perhaps to excess. Maybe someone you know shows some of the signs of trouble.
Medically recognized substance use disorders
Alcohol Use Disorder: Alcohol is a depressant. Alcohol use disorder is more common among adult men than among women, but the gap is narrowing. It typically develops at a young age. Severe use is commonly referred to as alcoholism.
Caffeine Intoxication: Heavy intake of caffeine resulting in symptoms including restlessness, nervousness, insomnia, gastrointestinal disturbance, rambling thoughts and speech, cardiac rhythm disturbances.
Cannabis Use Disorder: Highest among 18- to29-year-olds. Often the first drug used and often used with other drugs. Prevalence decreases with age.
Hallucinogen Use Disorder: These substances alter perception. Phencyclidine — “angel dust” or PCP — produces feelings of separation of mind from body.
Inhalant Use Disorder: Sniffing glue. Inhalant substances are volatile hydrocarbons, toxic gases that are released from glues, fuels and paints, that can have psychoactive effects. Occurs primarily among ages 12 to 17.
Opioid Use Disorder: Opioid drugs include heroin and prescription pain-relievers such as oxycodone, codeine, morphine, and fentanyl. According to the American Society of Addiction Medicine, opioid-related overdoses are now the leading cause of death in Americans under 50 years of age and prescribed opioids are the “overwhelming initial source” of addiction.
Sedative, Hypnotic, or Anxiolytic Use Disorder: Addiction to sleeping pills and anti-anxiety medications (Valium, Xanax, Librium). These are brain depressants. Rates are highest among 18- to 29-year-olds.
Stimulant Use Disorder: This group include amphetamines, Ritalin and cocaine. These drugs are commonly prescribed for the treatment of attention-deficit/hyperactivity disorder (ADHD) and narcolepsy. Cocaine use in the U.S. is highest among those aged 18 to 25.
Tobacco Use Disorder: Nicotine in tobacco acts as a stimulant for the central nervous system. Studies show that 68 percent of adult smokers want to quit and 50 percent of smokers have tried.

Behavioral disorders
Binge-eating disorder (overeating disorder): Uncontrolled eating, often accompanied by purging (bulimia).
Gambling disorder: Because of the quick feedback, it can provide reward symptoms to the brain much like alcohol or cocaine.
Gaming disorder: It has been recognized officially by the World Health Organization, but is still under study in the United States for classification as an addictive behavior. Other behaviors under study include smartphone use, Internet gambling, pornography, eating and shopping.
Compulsive behaviors
These can include such things as hoarding, shopping, sex, eating, gambling, exercise, even talking compulsively. While the behaviors may not provide the pleasure reward of an addiction, they serve to relieve anxiety and stress and, if unchecked, can have serious negative consequences in a person’s life.
What else to know
Simply put, an addiction is a repetitive use of a substance or engagement in a behavior because of the rewards message the substance or behavior transmits to the brain, despite numerous negative consequences the activity produces in the person’s life. Tolerance increases with time. The person may not even be aware of the damage being done by the behavior, or may continue in spite of it. At some point, the substance or behavior may dominate the addicted person’s daily life. It is highly likely that these conditions are accompanied by other mental health conditions, such as anxiety or depression.
Science has been unable to come up with one cause of addiction, nor can it predict who will become addicted. However, there are numerous risk factors that can be recognized, some of which may be avoidable, some not. Genetics/family history play a significant role in determining vulnerability as do environmental factors, including growing up in a dysfunctional family and early exposure to substances or abuse. The presence of other mental health issues can also contribute to susceptibility to addictive behavior. Even physiology may play a role since men seem to be more susceptible to addiction than women.
That said, there are a number of conditions that can predict the presence of an addiction. The following list is adapted from one used by the Mayo Clinic. Substitute the specific substance or behavior for the word “drug.”
— Feeling that you have to use the drug regularly — daily or even several times a day.
— Having intense urges for the drug that block out any other thoughts.
— Over time, needing more of the drug to get the same effect.
— Taking larger amounts of the drug over a longer period of time than you intended.
— Making certain that you maintain a supply of the drug.
— Spending money on the drug, even though you can't afford it.
— Not meeting obligations and school, family or work responsibilities, or cutting back on social or recreational activities because of drug use.
— Continuing to use the drug, even though you know it's causing problems in your life or causing you physical or psychological harm.
— Doing things to get the drug that you normally wouldn't do, such as stealing.
— Driving or engaging in other risky activities when you're under the influence of the drug.
— Spending a good deal of time getting the drug, using the drug or recovering from the effects of the drug.
— Failing in your attempts to stop using the drug.
— Experiencing withdrawal symptoms when you attempt to stop taking the drug.
Generally, two or three symptoms suggest a mild disorder, four or five a moderate one and anything more, a severe disorder.
The good news is that there is a variety of treatment available for all these conditions. If a problem is suspected, don’t try to deal with it alone. Consult with a health professional (doctor, psychologist, social worker, addiction specialist) and begin the road to recovery. 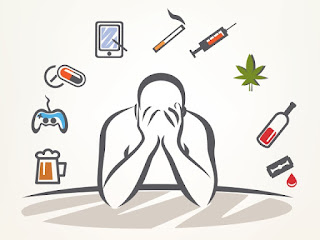