The Jimmys: Murray, Cannon and Palmer 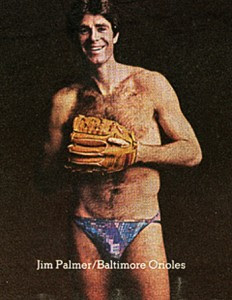 At one point in my four-plus decades in newspapers, I was a sports editor. It was for a paper in Binghamton, but it was still a great job. I got to go to sports editor seminars where everybody talked sports, hung out, ate and drank. I got to cover some Yankee games. Jerry Izenberg, former columnist for the Newark Star-Ledger once lent me his typewriter (see Wikipedia) so I could file my story after a game because I had left my machine in Binghamton. I also once interviewed Baltimore Orioles ace pitcher Jim Palmer as he soothed his aching body in the whirlpool. Yes, au natural. And yes, the sonofagun was as handsome in person as he was on TV.

But the best part of being a sports editor was that I also got to write a column on whatever I pleased. The bosses preferred local topics, of course, but it was Binghamton so they let me wander off to professional sports. And when their travels brought them to the Southern Tier, I talked with the likes of Roger Staubach (polite, if dull), Rocky Graziano (the textbook image of a pug) and, too briefly, Jackie Robinson. All in all, it seemed like the best job in the world and I often wondered wistfully, as my career veered back to the hard news side, what life might have been like if I had pursued a career as a sports columnist.

Now I know and now I have no regrets. I found the answer in a discarded copy of Jim Murray’s autobiography, which I picked up for a buck at the Thrall Library used book store (still the best deal in town if you read without the aid of a Kindle). Murray, one of the founding fathers of Sports Illustrated, was also a nationally syndicated sports columnist for the Los Angeles Times. He covered everything from NASCAR to golf and his style was unique. Murray was not a numbers guy. He didn’t cover events so much as the people participating in them.

On Muhammad Ali: “He didn’t have fights, he gave recitals. The opponent was just the piano, the backdrop. All eyes were on Ali. He loved it. It was his stage, his life. He was like Bob Hope with a troop audience. Olivier at the Old Vic.”

And what of the column that won him a Pulitzer and made him famous? Murray: “(It) came into my life in 1961. And took it over. A column is more than a demanding mistress. It is a raging master. It consumers you. It is insatiable. It becomes more you than you. You are not a person, you are a publicly owned facility. Available on demand.

“It has a calamitous effect on family relations. It confuses the kids’ identities. It rearranges your priorities -- and not for the better.

“Jimmy Cannon had the right idea. He apparently accepted the fact early that he was wedded to the column. And he lived alone in a midtown Manhattan hotel and devoted his whole life to it.”

Maybe it‘s just me, but it sounds like Jimmy Cannon (one of my other favorites) shortchanged himself on the whole “we only have one life to live” deal. I was thinking about the two Jimmys because I had just spent the weekend watching some of the most godawful professional football games that people were ever asked to fork over a couple of grand for. The kind of games that rekindle the romance of high school football Friday nights.

Take the Jets. “Please,” as Henny Youngman (whom I once met in an art gallery in Woodstock) famously said.

Maybe it’s just me, but if Mark Sanchez is ready for prime time, so is Jimmy Fallon. The Ravens’ best play was pass interference on third and long. But hey, don’t beat up on Sanchez too much. Tony Romo and Philip Rivers and Drew Brees and Bret Favre -- established stars all -- all stunk up the joint in their first games.

Maybe it’s just me, but when most opening games were comedies of errors and penalties (Washington vs. Dallas was almost unwatchable) and ex-con Michael Vick is your standout quarterback, if you’re the NFL you should think twice about cutting the preseason by two weeks and adding two games to the regular schedule.

And don’t get me started on Joe Girardi. He makes Keanu Reeves seem animated. Girardi doesn’t manage games so much as he scans actuarial reports. He has all the instincts of a computer. If he has the best job in baseball, how come he never smiles? Just asking.

One more thought before I get too carried away with this whole sports column thing: If, as some observers claim, Tiger Woods being unable to play golf at a high level is good for the game because it has opened the field to so many other unknown golfers to make their names, how come the golf writers keep writing only about Tiger’s struggles and we still don’t know the names of those other golfers?

Maybe it’s just me, but I think the two Jims -- Murray and Cannon -- would have loved writing about Tiger. After all, he doesn’t just win in grand style, leaving the rest of the field in shambles, he loses in epic fashion, his life burning down around him like some tragic Greek hero out of Aeschylus. Win or lose, all eyes are on the Tiger. The score is secondary.

And I apologize for all the name-dropping.