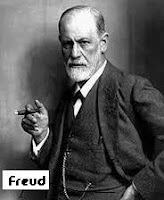 By Bob Gaydos
The popular TV show “Big Brother” is a virtual hot house of Freudian slips. And that should make it easy for you to figure out the next two members of The List of Most Influential Thinkers of the 20th Century.
Bravo to “the lady in the balcony” as Dr. IQ used to say on the radio. Yes, hats off to two Europeans whose influence on contemporary thought and culture has not waned even as their ideas came under increasing criticism following their deaths: George Orwell (Eric Arthur Blair) and Sigmund Freud.
Orwell died 60 years ago, at the height of his writing career. He was 46. Do you have a TV show named after a phrase you created, a phrase so familiar around the world that it tells you all you need to know about the show before you watch it? Rhetorical.
Orwell’s most famous works, “Nineteen Eighty-Four” and “Animal Farm,” have sold more than 11 million copies each and are still widely read by students today. No other writer has produced two books that have been as successful.
From “Animal Farm’s” “All animals are equal but some are more equal than others,” to Nineteen Eighty-Four’s “Big Brother is watching you,” Orwell’s memorable critiques of the failure of totalitarianism have become part of our everyday language and shaped how we regard government efforts to control our lives and the tendency of revolutionaries to abandon their core principle of equality once they gain power. Fiercely anti-fascist, then anti-communist, he was a wealthy Englishman with socialist ideals. His strength was the clear, crisp, incisive way he expressed his views.
Think of “Newspeak’’ (deliberately simple but confusing language designed to discourage independent thought) and “Doublespeak” (holding two contradictory beliefs simultaneously)” and you have Orwellian ideas. Thanks to Orwell, we recognize them for what they are when we hear them today. (Well, some Tea Partiers may be the exception.)
Orwell was not only a novelist. He also virtually invented the free-wheeling social commentary column (today we call them blogs) and wrote hundreds of essays. Any serious writer would do well to follow his six rules of writing, as presented in an essay, “Politics and the English Language.” To wit:
And if you dare to disagree with any of this, the “Thought Police” will get you.
And who better to police our thoughts, conscious, unconscious or preconscious, than Sigmund Freud? The so-called father of psychoanalysis was by far the most influential 20th century figure in the study of how the mind works and how it shapes what we become. He believed the unconscious part of our brain, where we store all the stuff that happens to us, including the really nasty stuff, played a primary role in this.
It’s true that a lot of his ideas have been challenged, but a measure of Freud’s unmatched influence is that even the vigorous debate in the field of psychology has revolved to a large extent over whether he was right or wrong. He dominates the conversation.
Freud introduced new ideas on how we think about memory, identity, sexuality, childhood, the meaning of dreams. He gave us the Oedipus complex and unconscious guilt. He introduced the therapist’s couch and lying-down talk therapy, which has evolved for the most part into sitting-up talk therapy. Dozens if not hundreds of movies, plays and novels have been influenced by Freud’s work.
Other forms of therapy have gained prominence since his death, but anyone asked to free associate when the word “psychologist” is uttered is odds-on to respond “Freud.” Sigmund makes The List. His mama would be proud.
* * *
So here’s where we stand with the list of 20 (in no specific order):
bobgaydos.blogspot.com
Posted by Bob Gaydos at 12:39 AM