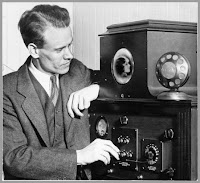 By Bob Gaydos
There is a statue in the Capitol Visitors Center in Washington, D.C., part of its Statuary Hall collection, that contains this simple inscription: “Philo Taylor Farnsworth: Inventor of Television.”
Need I say more?
For better and worse, Philo Farnsworth’s vision, and subsequent inventions, changed the world we live in. There’s no way he is not one of The 20 Most Influential Thinkers of the 20th century. At the delicate age of 13, he came up with his idea for television and at 21 made the first electronic transmission of television, which became the basis of all we take for granted today, from “Jersey Shore” to “Meet the Press.” His wife Emma’s face was the first human image transmitted via television.
As with many inventors, what he envisioned is not necessarily what developed. After fighting and beating RCA over patents, he hoped television would become a tool to bring education, news, and the arts into the living rooms of ordinary Americans. By the 1950s he had banned the use of TV in his own house, although he did make a guest appearance in 1957, as “Dr. X,“ on the popular quiz show, “I’ve Got a Secret.” The panel couldn’t guess his secret, but there‘s no mystery as to why he‘s on The List.
Similarly, Rachel Carson, marine biologist and nature writer, called by many “the mother of environmentalism,” surely had no idea of the profound impact her book, “Silent Spring,” would have on the planet she so wanted to preserve for the rest of us. Her research and elegant writing on the negative effects that the widespread use of synthetic pesticides to kill insects had on all life on the planet not only resulted in a ban on the use of DDT (which she never advocated, by the way), but it gave rise to a different way of looking at the interconnectedness of all organisms and the need to protect and conserve nature’s resources.
She died of cancer at 57, only two years after publication of her most famous book, but her legacy lives on in thr Environmental Protection Agency and in every environmental debate, from the Gulf of Mexico to the Marcellus Shale. She’s on The List.
So here’s where we stand with the list of 20 (in no specific order):
The two guys who started me on this quest both added suggestions last week. I think I’m not taking any more after this, but here’s what they offered:
Here are the remainders from my original list of 29: Bertrand Russell, Noam Chomsky, Carl Jung, Jean Paul Sartre, Sigmund Freud, T.S. Eliot, George Carlin, Albert Camus, Ludwig Wittgenstein, John Dewey, Bill Wilson, Dorothy Day, Bill Gates, Thomas Watson, Sam Walton, George Orwell, Margaret Sanger, Khalil Gibran, Betty Friedan and Isaac Asimov.
And here are other names suggested: Billie Holiday, The Beatles, Ken Wilbur, Vivekananda, Bob Dylan, Thomas Merton, Groucho Marx, Clarence Darrow, John Ford, Ted Williams, Al Gore, Charlie Parker, Louis Armstrong, Miles Davis, Duke Ellington, Jon Stewart, Franklin and Eleanor Roosevelt, Benjamin Spock, Oprah Winfrey and Diaane Ravitch.
Only room for eight more.
bobgaydos.blogspot.com
Posted by Bob Gaydos at 4:10 PM