In jail with Kayvan Sabeghi 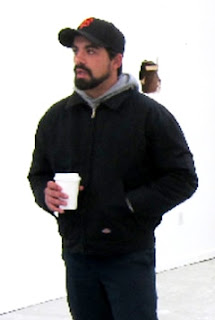 Note: This article was first posted No. 5. An investigation of Sabeghi's treatment by Oakland police is under way.

(A second Iraq War veteran was seriously injured in Oakland after a run-in with police using tear gas and other riot control measures in connection with Occupy Oakland. What follows is a first-hand account of the man’s treatment in an Oakland jail.)

By Max Gaydos
I was arrested on the night of Nov. 2 along with about 100 others from Occupy Oakland, charged with failing to disperse. After being processed and booked and placed in several different holding cells at an Oakland jail, I met Kayvan Sabeghi (photo).
He had been making phone calls, trying to post bail and it seemed like he’d be out soon. They told him his bail would post in four to six hours and he slouched into a sitting/sleeping spot on a bench like the 20 or so others occupying the cell. Some of us were awake and talked with him about what his charges were. He told us he was charged with assault on an officer and how the police actually just beat him
Some time later, I noticed how sweaty and clammy he was, with his arms clenching his stomach. He stumbled to the window and pleaded for medical help. He was disregarded. Those of us in the cell witnessing this naturally wanted to help. How one can ignore such obvious pain and need for help is sickening. One kid banged on the cell door until the on-duty officer came around to tell him to stop making so much noise. Clearly skeptical of the many pleas for medical assistance coming from the cell, the officer opened the door and made it clear he felt we were wasting his time.
By this point, Kayvan had collapsed to the floor at the officer’s feet and was saying things like, “I can’t breathe,” “my whole f…ng stomach,” “Dude, I’m passing out, I’m passing out, I’m just passing out.”
I don’t know if he ever did pass out, but it was enough for the officer to ask him what his name was. Speech was coming with difficultly for Kayvan, but he managed to answer. He then began throwing up what looked like stomach acid. The officer asked for someone to bring over a garbage pail. A nurse did so and asked other rudimentary questions, though Kayvan was still not getting the amount of attention he surely seemed to need.
Lying on the floor, hovering around his puddles of puke, he answered all the questions. Then they shut the cell door and he crawled down the corridor out of sight. A janitor pushing a mop bucket rattled down the hallway.
Later, the officer came back to talk to those in our cell. He told us to let him do his job and to not make it harder for him. He asked if any of us had any kind of medical degree to qualify us to handle or even comment on how he handled the situation. A resounding silence he understood to mean no. But we all had taken Kayvan at his word.
* * *
Here is a link to a report on Kayvan Sabeghi by The Guardian:
http://www.guardian.co.uk/world/2011/nov/04/occupy-oakland-second-veteran-injured?fb=optOut&fb_source=message
Later reports in the San Francisco Chronicle said Sabeghi, 32, “told members of Iraq Veterans Against the War that he was beaten with nightsticks on his hands, shoulders, ribs and back by police or Alameda County sheriff's deputies. He suffered internal injuries, including a lacerated spleen, he told the group. Emily Yates, a member of the group, said Sabeghi was awake and alert when she visited him at the hospital Friday. Sabeghi identified himself as a veteran, Yates said.”

Max Gaydos, a native of Scotchtown, is an art student on leave from SUNY Purchase, currently living in Oakland.