Legend or no, Joe Pa had to go 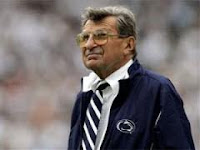 By Bob Gaydos
The lead on the Associated Press story Wednesday afternoon was straightforward and shocking at the same time: “STATE COLLEGE, Pa. (AP) -- Joe Paterno, the Penn State football coach who preached success with honor for half a century but whose legend was shattered by a child sex abuse scandal, said Wednesday he will retire at the end of this season.”
At the end of the season? Is he kidding? Are they kidding? Are the trustees of Penn State going to let Paterno, living legend or no, get away with that?
Those were my italicized thoughts immediately on reading the AP story, after following nearly 24 hours of non-stop coverage of the Penn State scandal, not only on radio and TV sports talk shows, but on network and cable TV news shows and on the front page of every newspaper in the country.
“Joe Pa,” the 84-year-old face of Penn State was, as usual, setting his own terms for when he would leave his beloved university. Or at least he was trying to. But this time, Standup Joe, as he is also lovingly known around State College, had no leg to stand on. That he was still football coach Wednesday afternoon was an upset in itself. For him to be allowed to coach on the weekend against Nebraska and then stay on to the end of the season would be the most profound insult to the alleged victims of the assaults and their families and would tarnish even more the image of Penn State.
The issue in this case is simple: What legal and moral responsibility did Paterno, as head coach and de facto king of Penn State, have in protecting young boys from sexual assaults from one of his coaches? Again, quoting from the AP story: “Paterno said he was "absolutely devastated" by the case, in which his one-time heir apparent, Jerry Sandusky, has been charged with molesting eight boys over 15 years, including at the Penn State football complex.”
Paterno reported an allegation of such an assault nine years ago to the university’s athletic director after Mike McQueen, a graduate assistant on the football team who said he saw Sandusky in the shower at the university with a 10-year-old boy, reported it to the coach. Legally, McQueen and Paterno apparently feel they did all they had to do.
Maybe so. That’s for the state attorney general to decide. Morally it’s a different matter. And the answer is clear: No, neither man did all that needed to be done. The assistant coach did not try to stop whatever was going on in the shower. Instead, he called his father who told him to leave. They talked about it and told Paterno the next day. Paterno told the AD. Nine years later -- during which time Sandusky continued to operate a foundation to serve underprivileged young boys and continued to be seen around Penn State -- Sandusky was arrested and athletic director Tim Curley and vice president Gary Schultz were charged with failing to report the incident to the authorities.
But there was Paterno, several times a target for those who thought he was too old to coach and should retire and now holding the record for most football wins among Division I schools, still on Wednesday afternoon attempting to dictate the terms of his retirement.
It is an arrogance and sense of entitlement that no serious board of trustees can allow to succeed. Paterno made much during his tenure of holding his football players to higher standards, morally, than coaches at other schools. It is part of what created his legend. Failing to notify police authorities for nine years, during which time school officials made it clear they weren’t going to pursue legal action against Curley, was more than a lapse in judgment, it was a profound moral lapse. Or maybe the image Paterno has projected all these years was false.
Whatever the case, Paterno and school officials suggest by their callous disregard for the boys and potential future victims that protecting the reputation of the school comes first and, at Penn State, the football reputation trumps all.
It is sad, it is troubling, it is infuriating. In this day and age, there are still adults who do not recognize that there is a moral obligation to do everything possible to protect the most vulnerable among us from predators -- even when to do so may harm other people and institutions we hold close. Sometimes we are indeed our brothers’ keepers.
Retire at the end of the season? No way. Joe Pa should have retired Wednesday afternoon. He was fired Wednesday night. Finally, the trustees reclaimed control of Penn State.
bobgaydos.blogspot.com
Posted by Bob Gaydos at 9:53 PM