Bosons and bankers: What's up, God? 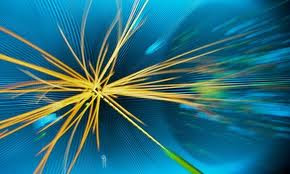 By Bob Gaydos
Sometimes, having to have an opinion on any topic that comes down the pike actually requires a bit of work. Usually, it’s when you don’t have the foggiest idea what people are talking about, but they all appear to be smart and they all say that what they are talking about is very important, or significant, or shocking, or historic.
And so this week, I give you two of potentially the most important stories of the year, which I feel safe in saying most of you -- being American, like me -- also don’t know much about and have heard very little about from what passes as our news media these days:
In fairness, some of the media did try to explain Higgs boson (illustration) and its potential significance -- explaining the origin of the universe and the nature of the matter, stuff like that -- but most, in my experience, bogged down in an energy field of scientific mumbo jumbo whose mass could only be contained by the Internet, but certainly not my brain.
Still, the fact that scientists in Geneva, using a $10 billion atom-smashing super-collider, say they have found a subatomic particle that would not only validate “The Big Bang Theory” on television, but in real life, is literally mind-boggling. As I understand it, the boson particle (named after Scottish physicist Peter Higgs) is kind of like a universal sticky particle to which other sub-atomic particles, such as quarks, “stick” as they whiz around wherever. The more such particles that stick, the more bosons involved, the more mass the particles eventually have and, with gravity added, the more weight. They become something.
No boson, no sticking, no universe. Nothing. With bosons, we have planets and primordial ooze and dinosaurs and humans and science and evolution and rock and roll and super-colliders and big banks, all neatly aligned as if some higher power had cleverly laid out the whole plan to explain the Big Bang.
If you guessed the big banks reference was a hint on LIBOR, good for you. You are promoted to honors economics. LIBOR stands for London Interbank Offered Rate. It is the average cost of borrowing at which Britain's banks lend each other money. It is calculated daily, based on information supplied by those banks and is used worldwide to set prices on trillions of euros and billions of dollars worth of derivatives and other financial products.
And yes, there’s that word derivatives again. What’s happened is that a bunch of too-big-to-fail big banks, playing God with other people’s money, got together between 2005 and 2009 and rigged the rate to keep it low. They lied about their financial health and conspired to make each other look better than was true, thereby luring unsuspecting customers to invest even more in worthless mortgages, loans and, ugh, derivatives. The big difference in this story is that, while the big banks in America pretty much got away with their deceit and theft, the Brits are getting tough on them.
The chairman of Barclay’s has resigned and the bank, apparently claiming it thought it had received the OK to lie from the Bank of England, Britain’s central bank, has agreed to pay a $450 million settlement. It also agreed to cooperate with police authorities and Parliament, which are looking to hold major banks and their executives legally responsible for this massive scandal.
That’s a lot different from the cloying welcome Jamie Dimon, CEO of JP Morgan Chase, got in the U.S. Senate recently in explaining his institution’s loss of $2 billion in customers’ money through synthetic derivatives and other risky bets. Chase, along with Citigroup, HSBC, RBS, and a half dozen other banks are involved in the LIBOR conspiracy.
The U.S Justice department has all the evidence uncovered in the LIBOR investigation (which is reportedly extensive) and appears to be letting Britain take the lead in prosecution for now, which is just as well, given how many American bankers have been prosecuted to date for throwing the world economy into crisis.
If you’re going to have an opinion, look for the links. The links between the Higgs boson and LIBOR stories, beyond their complexities and lack of attention in the United States, are obvious. Both have gravitas, in these cases, a combination of mass, gravity and universal significance. Both involve amounts of money most of us cannot comprehend. Both involve an incredible amount of teamwork among people within the same profession. One group effort, as noble an investment of money, time and brain power as is imaginable, seeks to explain why we are all here, at least in a physical sense. The other, money, time and brain power notwithstanding, only makes me wonder if we’ll ever figure it out morally.
bobgaydos.blogspot.com
.
Posted by Bob Gaydos at 8:37 PM