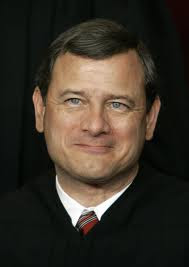 By Bob Gaydos
So, John Roberts, hero of the left wing and savior of Obamacare. Who wuddda thunk it?
Actually, the chief justice’s law school professor, for one. Laurence Tribe, who taught Roberts (photo) as well as President Barack Obama at Harvard Law School, opined on Tuesday, two days before the historic Supreme Court ruling was revealed, that he felt Roberts would vote to uphold the law, as much to reinforce the image of the court as an apolitical neutral umpire as to rule on the law’s constitutionality.
In an interview on MSNBC, Tribe said, “I think that the chief justice is likely to be concerned about the place of the court in history and is not likely to want the court to continue to be as deeply and politically divided. Doesn't mean he will depart from his philosophy. You can be deeply conservative and believe the affordable care act is completely consistent with the United States Constitution.”
Which is pretty much what Roberts did, siding with the four so-called liberal justices to preserve the major legislative victory of Obama‘s presidency. Of course, the airwaves and the blogosphere exploded Thursday as anyone with a law degree and an opinion on the Supreme Court ruling on the Affordable Care Act and a means of transmitting that opinion to a large audience explained why Roberts did what he did. Or, as many Republican politicians did, to call Roberts a traitor to their cause. Safe to say, many of the latter group aren’t too concerned with the nuances of judicial restraint and co-equal sharing of power among three branches of government.
I don’t have a law degree and I don’t belong to any political party, but, hey, I‘ve got a blog, too. And without pretending to read Roberts’ mind, some things seem obvious in the wake of this ruling:
So, Chief Justice John Roberts, intentionally or not, hero of the left wing.
bobgaydos.blogspot.com
Posted by Bob Gaydos at 3:09 PM