As omens go, the eagle soars 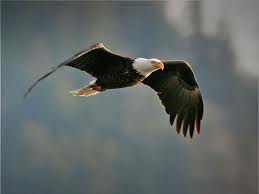 Do you believe in omens?
I believe in omens.
Not the dire, gloom-and-doom omens of Greek tragedy. It’s not that I dismiss the existence of negative omens out of hand, or that I think bad things don’t happen, but rather that I choose to focus my energies on what I perceive to be good omens.
For example, while lying in the grass a few days ago, staring skyward and having a relaxed conversation with a friend on a beautiful, warm, spring afternoon, I found my attention slowly shift to a winged object flying low in the sky right towards us. As it got closer I could make out the distinctive white head. “That’s an eagle!” I exclaimed.
Indeed it was. And it kept flying with a slow, deliberate stretching of its wings right over us and on past the tree line where it was no longer visible. A youngish bald eagle, and an eagle with a purpose.
A positive omen for sure. After all, it was an eagle, not a turkey vulture.
The trick with omens, of course, is making the connection between them and real life. What did this omen mean to me beyond the fact that I would definitely buy a ticket for the New York Lottery’s Megamillions drawing?
For one thing, it got me thinking about a similar encounter I had had a couple of years ago when a coyote casually trotted in front of my car as  I was sitting reading on a quiet country road. No fanfare, no fuss. Right by me and off into a cornfield, out of sight, but not out of mind. I wrote about the coyote and the fact that it got me to thinking about some positive events that had recently occurred in my life that would normally escape notice. It change my outlook, my focus, my day.
So, too, with the eagle and I think the connection is, literally, the connection, between eagle and man, coyote and man, nature and man. We humans have a way of acting as if the planet is our personal plaything, to lord over and do as we will with all other living creatures. So we revere eagles and protect them because someone decided they were noble looking and worthy of being our national symbol, whereas coyotes are … not.
As a result of this human arrogance, we have polluted the atmosphere of the planet, added all manner of chemicals to our natural food supply, and destroyed the natural habitat of countless species of animals (and eliminated many species as a result), all in the name of progress. This arrogance has spread, perhaps unavoidably, into our relationships with each other. How far is it, after all, from treating animals with casual indifference or callous disregard to treating human beings the same way. We call it politics and it is the shame of our nation today.
The eagle tells me this is wrong. Majestic in its slow, deliberate flight, it says to me, “You may think you’re in charge, but don’t get too comfortable. We share this tiny planet and you almost drove me out of existence for no good reason.”
And we continue to do so, willy nilly melting the polar icecaps, committing genocide on species of animals, loading up our food supply with chemicals and altering the very genetic makeup of the food so that more can be grown faster in less space and less cost, to the considerable profit of chemical companies that now call themselves food companies. All of this is connected, the eagle reminds me, but most of us are too busy arguing over things that have nothing to do with the future welfare of the planet and its inhabitants.
For me, that means my recent writing about the revived interest in slaughtering horses, the mass murder of honey bees, the resistance to labeling food that has been genetically modified has not been a trivial pursuit. It means that expressing concern over the infusion of chemicals in our food, the resistance of those in power to honestly discussing these topics and their loyalty to powerful corporations that seek to control the planet by modifying it in any way possible to suit their own needs, is not a departure from writing about the “important” stuff, i.e. politics. Instead, the eagle tells me, it means I am finally writing about the stuff that really matters.
In case you’re wondering, here’s a small sampling: the elimination of all orangutans (our closest cousins) on the planet; the poaching of elephants for their tusks; the same threat to rhinos; the labeling of horsemeat and other animal byproducts as beef; and “no-kill” animal shelters that kill. There’s more: the belief by the Nestle CEO that humans have no intrinsic “right” to water; the power of such companies as Monsanto, Nestle, Bayer and others to buy politicians to write laws that protect the companies from having to reveal what they are doing to the food they sell. And let‘s not forget efforts by those in power to silence the voices that raise alarms on these issues.
It is all connected. We are all connected. What happens in Sumatra or the Amazon matters in Manhattan and Paris. We humans should be working together to preserve and protect our home instead of bickering over personal ideologies, which won’t matter much when the ice caps melt, the other species are gone and we have no one to look at but ourselves.
That’s what the eagle, flying low and with a purpose, tells me. Focus on the important stuff. Be positive in approaching life. It’s a beautiful world; enjoy it. And keep buying lottery tickets. (I had a Megamillions number worth $2. It’s a start.)