Growing up in an alcoholic home leaves unseen scars 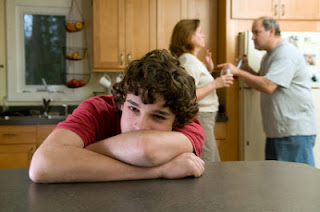 (My latest Addiction and Recovery column.)
In writing about alcoholism, this column usually focuses on the person most directly affected by the disease -- the alcoholic. But the impact of alcoholism is felt by every person with whom the alcoholic comes into contact and that begins with the immediate family. In fact, some of the persons most seriously affected by the disease of alcoholism are children who grow up in an alcoholic household. Indeed, these households give a whole new meaning and depth to the term “dysfunctional.”
Growing up in a family with one parent who is an alcoholic and the other struggling to maintain some sense of order, if not sanity, can leave scars that last well into adulthood. Worse, the children who grow up in such households may not realize how ill-prepared they are to deal with life. And that’s whether they become alcoholics themselves or not.
Often, the non-alcoholic parent tries to shield children from the truth, as if they cannot see and hear what is going on every day in their home.  Much better, experts say, to be as honest as  possible with them, explaining the disease as an allergy to alcohol, that the drinking parent is sick and, most importantly, that the children -- who may feel violent effects of the alcoholic’s drinking -- are not at fault. Sometimes, the non-alcoholic parent is so consumed with trying to control the alcoholic, that the children become an after-thought, even neglected.
Either way, the emotional support and daily guidance needed to help young people make their way through an adult world later on is often missing. This lack of early guidance can show up in many ways as the children of such marriages, modeling their behavior on what they grew up with at home, find themselves unsure and unable to deal with life as it comes along -- and find themselves at a loss as to why.
As mentioned here before, the Al-Anon Family Groups, which includes Alateen for young people, is uniquely designed to help those who are living with an active alcoholic. This is not just the spouse of an alcoholic, but the entire family. For the non-alcoholic spouse, learning to separate the drinking spouse from the disease and recognizing that alcoholism has impacted you as well is the beginning of a long recovery process that can lead to a healthier, more well-adjusted life.
So, too, for the children. But it is important for the children of such households to keep tabs as adults on how they treat their own children. Do they mimic what they grew up with or do they use healthier, more balanced approaches? To this end, an Al-Anon booklet -- “How Can I help My Children?” -- offers a checklist for parents. In truth, it’s one that should prove useful to all parents, of any background:


For a list of Al-anon and Alateen meetings in the area, go to:
http://www.al-anonny.org/images/Orange_County_Meeting_List_Jan_2012_B.pdf