Behind the bluster, the GOP sacks America 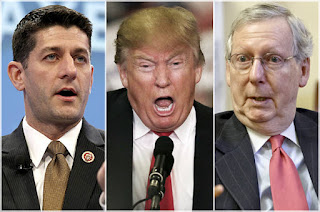 When that narcissist occupies the most powerful position in the world, it sometimes seems as if there's nothing else worth paying attention to or worth writing about other than whatever mean-spirited, idiotic statement or executive order emanates from him. Every headline, every news report, virtually every social media posting involves him. It is a nation taken hostage.

I have shaken my head in bewilderment every morning as I awaken since Nov. 9 and desperately look for something to write about that does not involve him. Let those whose jobs require them to write about him do their jobs and do it well and honestly and courageously. I'm still hung up on what the others in his party of convenience are doing to this country while everyone else is busy watching his Twitter feed.

The Republican Party once upon a time had a conscience, a sense of duty and had enough members with the guts to stand up and call a liar a liar, a bully a bully, a fraud a fraud, a bigot of bigot, and a crook a crook. Even when that crook insisted he wasn't one.

No more. Their leaders have sold out to Wall Street, to big corporations, to right-wing fanatics, to white supremacists, to hypocritical evangelicals. To the people who donated millions to fund their election campaigns. And so, while the narcissist in the Oval Office has rained havoc around the world, diverting everyone’s attention, Republicans in Congress have been taking a hatchet to every conceivable program or regulation in place to protect or serve the American public.

They helped coal miners by saying it is now okay for coal companies to dump their waste into the rivers and streams where their employees live. They say we don't need a law designed to keep mentally incompetent people from getting gun licenses. They say endangered species don't need protection from man. They say funding for PBS and the arts is unnecessary. They also say funding for Planned Parenthood is unnecessary. And one of their leaders, Paul Ryan, speaker of the House, he of the constant smirk, now says he will somehow manage to find $20 billion to pay for a wall between Mexico and the United States. That's the wall, you will recall, the narcissist said Mexico would pay for. Mexico said no way. That wall will never be built.

Also, and maybe you hadn't noticed, but congressional Republicans also say there's no reason for the narcissist-in-chief to show the rest of us taxpayers his tax returns. And that plan to repeal and replace Obamacare -- which apparently many Republican voters don't realize is also known as the Affordable Care Act? It still doesn't exist, after eight-plus years. Former GOP House speaker John Boehner said the other day, ‘’It's not going to happen.’’

He ought to know.

And finally, the piece de resistance, that $1 trillion, job-creating, infrastructure plan that the narcissist was going to design with his Republican colleagues in Congress? Haven't heard a word. Folks, they're making it up as they go along, stepping on people with little power and running away from questions by citizens who dare to show up at Town Hall meetings.

If you watch the movie, ‘’You've Been Trumped,’’ you'll realize this is all just the same plot over and over again. In place of the Scottish government that rolled over to the narcissist and let him wreak havoc on the Scottish coastal environment, bully people, ignore laws and build an ostentatious golf course, we have congressional Republicans, smiling and nodding and saying in private to other nations, ‘’Don't pay attention to what he says.’’

Don't worry, Europe, we’re still on your side. That Russian thing? Overblown. Fake news. You know how reporters are. Besides, we've got Mike Pence warming up in the bullpen. When, not if.

I digress. A recent posting on social media suggested that perhaps our narcissist-in-chief would benefit from a dose of LSD. At first glance, I thought this was somewhat bizarre since the aforesaid seems to already have a bizarre sense of reality. But what the heck, I read the article since there's nothing else on social media. The idea is that LSD strips the ego, lays it bare. Hello? This is me. Now. The article further said that the psychedelic drug was now being used again in legitimate research as a possible treatment for various illnesses.

I'm reporting this mostly because I came upon the article just after finishing reading Tom Wolfe's ‘’The Electric Kool-Aid Acid Test.’’ Yeah, I was late to the party, but synchronicity, you know?

I have my doubts that any drug could shrink that narcissist’s ego, much less induce a sense of reality that inspired love for all people. Timothy Leary and Ken Kesey were searching in different ways for something universal deep within the human spirit through the use of psychedelics. As far as we know, they didn't find it. Then the government made it illegal.

But hey, if they're really doing research with LSD again, I’d just as soon they use Mitch McConnell as a guinea pig. Wouldn't he be a blast on the bus?