What about the mysterious Rosalind? 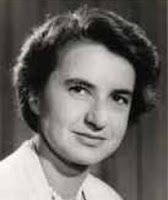 By Bob Gaydos
Before I put my thinking cap back on, it seems like a good time to take inventory on The List of Most Influential Thinkers of the 20th Century (and beyond). When last we met, I offered my suggested list of the first 10 candidates, sort of like the introductory class of the Baseball Hall of Fame.
Here it is:
Typically, that abbreviated list brought some interesting comments. On Winston Churchill, Edward B. Godwin offered this personal remembrance of the British PM’s far-reaching influence:
“Glad for the inclusion of Winnie! In January 1966 I came for a Saturday morning interview for a position in the English department at Orange County Community College. It was a good year for getting a job in my field as candidates with Master’s degrees in English were few compared to those in education. Enrollments were up.
“I had interviewed at other community colleges. Some were over the telephone – truly a surprise. I had not anticipated that experience. I had visited Adirondack Community College. I turned down both offers. Then I came to Orange’s interview.
“Now the relevance: Unexpectedly during the interview I was asked if I were given the opportunity to structure a course, what figure in the 20th Century would I chose and why. No other interview or experience prepared me for that question because I was a new teacher and did not expect that I would be creating a new course. As my mind almost went blank, Winston Churchill came to mind because of his use of language. However, I was weak in the knees and grateful I was sitting as I explained and defended my choice.
“At the end of the interview that involved many questions including a defense of textbooks I had used in teaching, I was offered a job. In later years I came to understand that it was the process of my thinking and use of language and materials that was being examined that day. Some of the contemporary authors mentioned in the interview I had to acknowledge I hadn’t read. However, I had read much of Churchill and history then and throughout my life.
“Language of our time reflects our time. The painting pallet of denotation and connotation has gone back to just the primary colors. No need to learn how to mix colors to create shades. F*** you and other grunts and farts have replaced real discussions about war and peace.”
Amen to that.
Linda Mangelsdorf had a strong argument on another of the top 10 list:
“Hey, Bob, as long as you are counting 2 for one, why not make it 3 and give Rosalind Franklin the credit she deserves for the discovery of DNA? Today most sources do acknowledge her somewhere in their articles (the quote below is from waaaaaaay down in a Wikipedia story), but at the time of the Nobel, she was already dead from cancer – work-related, no doubt, and therefore ineligible for recognition. Just a thought …
“From Wikipedia: ‘… Their mistake was partly based on Watson having misremembered a talk by Rosalind Franklin where she reported that she had established the water content of DNA by using X-ray crystallographic methods. But Watson did not take notes, and remembered the numbers incorrectly. Instead, it was Franklin’s famous ‘photograph 51’ that finally revealed the helical structure of DNA to Watson and Crick in 1953.’ ”
And finally, Kathy Garvey, who obviously had not seen my initial list, offered this: “Where, for heavens sake, are FDR, Benjamin Spock, Dorothy Day, Bill & Melinda Gates (counts as one), or for that matter Oprah Winfrey, who is as fine an example of stewardship of great wealth as I can think of. Oops! I ended with a preposition; Winston would not be happy.”
Actually, Kathy, Winston would be thrilled since it was that rule up with which he would not put. And actually, Bill (but not Melinda) Gates is on my list of possibles, as is Dorothy Day. I hesitated on Spock and FDR and eventually left them off. Oprah is a force to be reckoned with, but I’m not sure how much she has influenced others in dealing with wealth. No one else is giving away cars.
One other suggestion was offered, by Roseanne Sullivan: “I finally thought of a "thinker" for you and whether you agree or not, you should really read what she's got to say. Name -- Diane Ravitch: Discovery - NCLB and Charter Schools ain't all that!! Diane Ravitch was a strong supporter of No Child Left Behind when it was first introduced into the political educational realm. Recently, she's had a reawakening. You can read about her experience and her thoughts on the subject in an article she wrote titled "Stop the Madness" in the Aug/Sept. issue of NEA Today. She's an expert on education and thought of as a key historian on NCLB issues. I agree with everything she says in this article and its about time somebody said it in layman's terms.”
I second the applause for her reawakening on NCLB and her insights on education, but I fear the influence barometer doesn’t measure up.
So here’s the upshot -- Rosalind Franklin is in the top 10 with Watson and Crick with an asterisk for now, awaiting final judgment. That would make her the only woman in the first 10. Here ae the remainders from my original list of 29: Bertrand Russell, Noam Chomsky, Carl Jung, Jean Paul Sartre, Sigmund Freud, T.S. Eliot, George Carlin, Albert Camus, Ludwig Wittgenstein, Rachel Carson, John Dewey, Bill Wilson, Dorothy Day, Bill Gates, Thomas Watson, Sam Walton, George Orwell, Margaret Sanger, Khalil Gibran, Philo Farnsworth, Betty Friedan and Isaac Asimov.
And here are other names suggested: Billie Holiday, The Beatles, Ken Wilbur, Vivekananda, Bob Dylan, Thomas Merton, Groucho Marx, Clarence Darrow, John Ford, Ted Williams, Al Gore, Charlie Parker, Louis Armstrong, Miles Davis, Duke Ellington, Jon Stewart.
I’m thinking Rachel Carson and Philo Farnsworth have to be in there, but this is already way too long. Until next time then.
bobgaydos.blogspot.com
Posted by Bob Gaydos at 6:18 PM