3 things that are obsolete: Pennies, cursive, the GOP 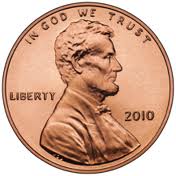 When, in the course of human events, certain things outlive their usefulness, it is important, perhaps even necessary, that society scrap them.   Send them to the landfill or the museum. Say bon voyage, adios, good riddance. Thanks, but no thanks.
It strikes me that three things fall into that category today in America:


Treasury Secretary Timothy Geithner announced last year that  the government would start using cheaper materials in pennies this year. What little copper was still there would likely disappear and there might be less zinc. He said this would save abut $75 million a year. Scrapping pennies altogether would save the government more than twice that amount and make life much more manageable for cashiers. (Nickels, by the way, are in the same category.) Rumor has it that some new pennies have arrived and they are, well, funky. Kind of light and not necessarily official looking.
I’m not sure who it is that still wants this money-losing money to be minted, There are surely plenty around to satisfy collectors. For comparison, Canada, which scrapped its penny Feb. 4, estimates there are 6 billion of them in circulation and it will take about four years for them to disappear now that minting has ceased. Merchants are rounding up or down until that time for cash customers. Sounds doable, eh?


There will always be people who will be able to write cursively, just as there are talented folks who can do calligraphy. But I have gone from cursive to manual typewriter, to electric typewriter, to laptop and smart phone. Each change made writing more efficient, which is the key. And think of the poor guy leaving memos on cave walls. What he would have done for papyrus and a pen?
Cursive is no longer required as part of the Common Core State Standards, but states have been slow to drop it. Hawaii, Indiana and Kansas have. New York leaves it up to the school district to make the decision. Folks, if your district teaches it, ask them to stop. You’d be better off learning about LOL than teaching your kids to write a capital  Z.


In the last presidential election, women, Latinos, African Americans,  gays and young people favored the Democrat, Barack Obama.  The whiz kids of the Grand Old Party are now trying to figure out how to buy those votes or change people’s minds. Few Republicans talk abut changing the party’s stances on some issues, such as immigration, abortion or gay marriage. Those who do are subjected to attack, ridicule and phony allegations. In fact, facts have little currency in the current GOP.
The best thing would be for the Republicans with a brain, a heart and a sense of obligation to actual governing (I know they’re out there) to form a new party. Leave Karl Rove, Roger Ailes, the Koch brothers and the Tea Partyers the ruins of the day. We don’t need them anymore.