The answers are in the stars 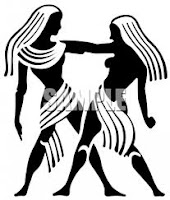 By Bob Gaydos
I blame it all on the stars. The ones in the sky, not on reality television. If they could have just stayed where they were supposed to stay, where they have been for billions and billions of Carl Sagan years, none of this other stuff would be happening.
You know, thousands of birds dropping dead out of the sky. Dead crabs washing up on the shore of Great Britain. Rightwing blowhards being dropped by conservative radio stations. A leftwing bloviate shown the door by a leftwing TV station. Republicans muttering not so much under their breath anymore that they wish Sarah Palin would just shut up.
Just when we had the sides all chosen up for the game, someone went and moved the stars and suddenly I’m a Taurus, not a Gemini. But hey, I don’t feel like a Taurus. I have been Gemini-like pretty much since I became aware of the signs of the Zodiac. Charming split personality, that’s me. Keep your bull to yourself, Parke Kunkle.
What kind of name is that anyway? Parke Kunkle. Who names a kid Parke when he’s already got Kunkle to carry around? Kunkle is an astronomy instructor at Minneapolis Community and Technical College, which sounds like a great place to get lost for your career. But with the Internet, nobody need be lost forever. So when Kunkle sat for an interview with the Minneapolis Star Tribune to help fill their Sunday paper, the stars were already aligned for his moment in the sun. (Please don’t tell me how to mix my metaphors. It’s my blog.)
Kunkle told the Sun that the stars had moved. Well, the Sun didn’t know anything about it, so it ran a story about how the Zodiac was all messed up and those signs people follow in the paper every day to help them plan their lives were, how to say this delicately, wrong.
OK, I can feel the scientists out there getting agitated about the stars “moving” references. That’s just a writer’s conceit, see? I know the stars didn’t really move, but it makes it easier to get people into the story than telling them the earth actually tilted on its axis thousand of years ago, altering its alignment with the stars and, of course, altering the signs of the zodiac, which were conceived about 5,000 years ago and are based on the earth/stars alignment. See how boring it can be explaining science? Call it the Fox news approach.
But here’s the real deal: Good old Parke tells us that scientists knew about this starry shift 2,000 years ago. Wow. How come WikiLeaks couldn’t find out about this? Not content to leave it there, with Pisces now Aries and Virgo now Libra, he also tells us there are really 13, not 12 constellations.
The scientists have known about this a long time as well, he says. Apparently they kept Number 13, Ophiuchus (Nov. 29-Dec. 17), secret because 12 signs fit neatly into a calendar year and Ophiucus is a yucchy name to say, much less have to admit to being one.
So there you have it. That’s why the birds dropped dead in Arkansas and Louisiana. It wasn’t the weather or bad food or poor navigation skills. It’s also why we’re having all these snowy days in January. I’m convinced it’s why Andrew Luck, the best quarterback in college football, decided to stay at Stanford for another year instead of coming out to be the first draft choice of the worst team in the National Football League, the Carolina Panthers, who (I could not resist this) truly have no luck at all.
It’s why WOR Radio in New York and WPHT in Philadelphia have dropped Glenn Beck, not because his ratings were falling and advertisers were leaving. It’s also why WPHT also dropped Sean Hannity, who had previously been dropped by KSL Radio, a Mormon station, in Utah. It has nothing to do with Beck ranting about crime around Independence Hall or KSL’s mission statement which calls for advancing “integrity, civility, morality, and respect for all people.” Its just Aquarius and Capricorn not knowing what’s what or who’s who.
Same goes for Keith Olbermann, the brightest and loudest star in the MSNBC galaxy, getting the quick shuffle out the door to even the sides. Here’s your money, Keith; keep your mouth shut.
The wacked-out zodiac (and what do you think the zodiac killer is thinking these days?) may well be responsible for the recent strange conversation between the president of the American Atheist Group and Bill O’Reilly, who still has a job at Fox news, but who has been told by his boss, Roger Ailes, to “shut up, tone it down, make your argument intellectually.”
The atheists had posted a billboard calling religion a scam. O’Reilly said he could prove them wrong: “I'll tell you why it’s not a scam in my opinion: Tide goes in, tide goes out. Never a miscommunication. You can't explain that.”
Atheist: “Tide goes in, tide goes out?”
O'Reilly: “See, the water, the tide comes in and it goes out … It always comes in, and always goes out. You can't explain that.”
Actually, had the stars not been out of alignment for thousands of years, O’Reilly may have known, intellectually, that tides rise and fall due to the combined gravitational effects on the Earth caused by the Moon and the Sun. That what the scientists tell us. For thousands of years, how these celestial bodies are aligned has determined the daily rise and fall of sea levels. It’s a scientific fact. You know, the same way that how the stars are aligned with the Earth has determined what happens in our personal lives for thousands of years. …
Actually, it’s all Parke’s fault.
bobgaydos.blogspot.com
Posted by Bob Gaydos at 4:21 PM 0 comments

Rummaging for the future in the past

I’ve spent the past few days rummaging through cardboard boxes and those old post office mail crates (tell me you don’t have a couple stashed away) on a search for some personal stuff long ago relegated to the archives, AKA the walk-in closet. I do this kind of stuff when I’m avoiding writing for this blog or, as is more often the case, when the only stuff to write about is seemingly the same, old nasty crap. Sorry for the bluntness, but that’s the way I feel about it.

My Zestoforange co-bloggers, Jeff Page and Michael Kaufman, bless their ever-acerbic minds and hearts seem to have no difficulty rising to the challenge of commenting on whatever may be the controversy du jour. They continue to call out the bad guys and thank God for that. I pretty much agree with what they write, but to me it is all part of an endlessly recycled argument in which nobody ever listens to the other side. It’s the stuff that ends marriages and divides nations. At some point, it’s pointless.

So I wasn’t going to write about the shootings in Arizona because I didn’t think I had anything new to say and, more to the point, it wouldn’t make any difference. And then, as I’m rummaging through the boxes, discarding old memos and scanning old editorials, I come across a copy of the Times Herald-Record from Dec. 22, 2006. Why am I keeping this? I flip through to find out and suddenly it hits me in the face: “ ‘Final’ thoughts of an editor.”

My last editorial at the Record. The one they let me sign. The one that expressed exactly what I talked about at the top of this piece and that still holds true more than four years later. I wrote about my worries. To wit:

“I’m worried. Not about Iraq, or global warming, or terrorism, or even urban sprawl. Well, sure, I’m worried about those things, but, truthfully, they’re mostly out of the control of any one of us. It requires collective action, a meeting of the minds, — compromise — to do something positive about complicated issues. What worries me is I think we’ve forgotten how to do this — all of us, not just Congress and the state Legislature. … I think our society has become coarser and, in many ways, less tolerant. This is evident in our culture, our schools, our political debate.

“Honest differences of opinion over the most mundane issues now routinely degenerate into personal attack and shouting matches. You hear a lot of this on TV and radio. The internet puts no filters on any opinion, however hateful or unfounded in fact. It is ‘buyer beware’ and pretty much free of charge. We have abdicated debate to the extremes. We complain about politicians who can’t work together, yet constantly return to office those same officials because they delivered some money for a favorite cause. …

“Here’s where the stuff comes in we don’t want to hear, the stuff we call hokey or lame or naïve. Sorry if you feel that way. Complain to the next guy.

“We have to stop whining and yelling at each other and listen for a change. We need to stop looking for someone to blame and accept personal responsibility. That doesn’t mean ignoring the liars and charlatans in our midst. It means expressing in clear, no-nonsense, non-threatening terms what we expect of each other. It means respecting those who mean us no harm but may disagree with us. It means recognizing our common roots and dreams, as individuals and neighbors. It means teaching our children by deeds as well as words. It means fessing up to our mistakes and honestly trying to fix them.”

Yeah, that’s how I still feel. Nobody is trying to fix things. Well, almost nobody.

“Really?” I replied, confessing with some embarrassment I hadn’t known the president planned to speak and never bothered to listen to him later.

“Yeah,” Zack said, “I was going to watch ‘The Office,’ but Obama was speaking so I listened. It was powerful.”

Well now. I was reminded. Yes, Barack Obama, someone I have criticized for not facing down his hypocritical critics on the right, clearly understands the need to find the solution rather than living endlessly in the problem. It is in his DNA as well as in his books. It’s why I and many others were thrilled when he was elected president. Persistently trying to bring people together, to disagree civilly, to compromise, is often seen as a sign of weakness, but it’s what I was looking for when I said goodbye to the Record.

Now, I will still have trouble rising to the challenge of the controversy du jour, so don’t expect a flood of harangues and harrumphs all of a sudden. But Zack reminded me that the future may not be as bleak as I had thought. You have no idea how good that made me feel.