Put on your high-heel sneakers ...

By Bob Gaydos
Can high heels really cause migraines? Apparently, Michele Bachmann thinks the answer is yes. She also continues to do well in polls of possible Republican presidential candidates. And so, we will once more sit in on Professor Bachmann’s class. The subject this time is health, not history.
Let’s start with a statement of fact: There is no scientific or biological evidence that wearing high heel shoes can trigger migraine episodes. There’s not much anecdotal testimony on any cause and effect either. This is not in any way to belittle the sometimes debilitating effect such headaches can have on those who get them (women are three times more susceptible). Indeed, if the issue were merely migraines and how they affect Bachmann’s ability to handle her job as a congresswoman from Minnesota -- or potentially, president of the United States -- there probably wouldn’t be much of an issue.
Some ex Bachmann aides (of which there are a lot) gave out the information on the migraines and said she took a bunch of pills to deal with them. They said she was sometimes incapacitated for a day by the headaches. Bachmann herself confirmed the migraines, but said she was always able to function. She said she takes prescribed medications for the headaches and side effects.
This is not unusual. Several presidents had to deal with painful health issues, but managed to fulfill the stressful duties of the Oval Office. John Kennedy and Thomas Jefferson suffered from migraines, to name two. So, assuming she is being forthright on the issue, doubting Bachmann’s ability to serve as president simply because she’s a woman who suffers migraines would be patently unfair.
But Bachmann’s the one who brought up the high heels, immediately making it a gender issue as well as a possible health issue. Her son, who is a doctor, said his mother noticed “a correlation” between the headaches and days when she is wearing heels. “The truth is she wears high heels all the time and she doesn’t get migraines” all the time, he said. “But she has found a correlation, though a correlation does not necessarily equal causation. It’s an unknown cause.” He pointed out she was wearing high heels during stressful situations.
Bachmann says she started wearing high heels as a little girl, when she wore her mother’s, and has always loved wearing them. In fact, high heels are a critical component of a certain type of modern powerful-woman package: Well-tailored expensive suit, stylish hair, high heels. I can be feminine and effective. Do not doubt me.
Fine. But high heels and migraines?
I decided to check with Orange County’s most famous female high-heel wearing politician -- Mary McPhillips -- to see if she ever had a problem with shoe-related migraines.
“No, never,” she said with a chuckle. “And I walked in a lot of parades wearing high heels. In fact, if I changed the color of the shoes, people asked me why.”
McPhillips, a funeral director who served as a county coroner, a member of the state Assembly and as Orange County executive, said the only physical problem she ever had because of wearing high heels was when she switched to wearing flats or low heels. “Your calf muscles have to change,” she said. “My legs would ache.”
Why did she even wear high heels all the time in the first place? Did it make her feel more powerful?
“When you’re 5-4, the heels at least put you on eye level with your constituents,” she said. “Now, when I wear flats, say to go to the store, people say, ‘You’re so short. Where are your heels?’ ”
Would she have any shoe advice for Bachmann, whose politics are 180 degrees from those of McPhillips?
“Try a pair of sneaks.”
Which brings me to my real problem with this whole issue. If Bachmann, who presents herself as a serious candidate for the highest office in this land, really believes that wearing high heels can occasionally trigger debilitating migraine headaches, why in the world does she continue to wear high heels? After all, she is willing to ignore scientific evidence on a host of other issues and speak and act based on her beliefs. So to me, this is not a gender issue, but a judgment issue.
I can admire a pair of shapely legs fitted out in high heel shoes as well as the next heterosexual guy (that’s another Bachmann column and an admittedly sexist comment). But if a woman who wants to be president thinks the shoes are triggering serious migraines and continues to wear them anyway, she’s reinforcing the suspicion that there’s more style than substance at work. She’s also flirting with being relegated to Bimbo Land and Sarah’s got that constituency all sewed up.
bobgaydos.blogspot.com
Posted by Bob Gaydos at 9:54 PM 0 comments

Since when do the facts matter? 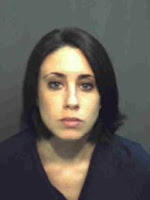 By Bob Gaydos
Here’s what we know for sure after a little more than a month of some of the most irresponsible, rush-to-convict “reporting” on the part of cable TV outlets and, sad to say, quite a few mainstream news organizations:
All powerful men are sex-addicted pigs … or not
Casey Anthony was a horrible mother … fact
Nor does it mean a woman wasn’t assaulted. I don’t know if DSK raped the hotel maid, although I suspect something hinky happened in that room. I suspect that Casey was somehow responsible for her daughter’s death, but can’t be certain how or why. I believe both prosecutors overreacted to the cases at first and that the Manhattan DA at least had the good sense to realize the limitations of his case and react accordingly.
I also believe that what passes for news media these days went well beyond traditional reporting guidelines on both stories, passing along suspicion and speculation instead of facts, playing on people’s emotions and creating that “groundswell” for conviction that Aphrodite Jones mentioned.
Once upon a time in America, real life tragedy was not our only source of entertainment. And reporters had to use the word “alleged” if they wanted to keep their jobs.
Bobgaydos.blogspot.com
Posted by Bob Gaydos at 6:48 PM 0 comments