Stepping down, slowly, from suboxone 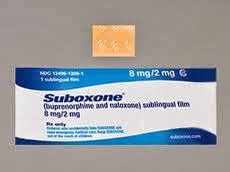 Five years ago, hooked on heroin and pain pills, Mary (not her real name) says, “I was depressed, malnourished, angry and I had just gotten out of jail. That was my turning point. I could continue downhill or change my life.”
Mary decided to change her life. Today, she is clean and sober, married, has a son and is attending classes at SUNY Orange. She says she owes much of this change to another drug -- suboxone -- which allowed her to kick the pain pills and heroin. Taking suboxone, which cost $200 a week and was not covered by her health insurance, was still cheaper than the drugs she was using, she says.
Now, she’s at another turning point. She’s weaning herself off suboxone. “I’m scared,” she admits. I feel when I’m on it, I’m safe. I don’t know if it’s the A.A. meetings or suboxone or both.”
Dr. Rodolfo Nazario, who calls suboxone “a miracle drug,” would say both. Nazario says some kind of outpatient program is also necessary to “deal with the psychological part of the disease.” Even then, it’s no easy transition. Despite his decade of treating patients with suboxone, Nazario says he has been able to wean “very few” off it. And, as he and Mary both emphasized, withdrawal from suboxone can be “horrible.” Which may explain Mary’s fear.
She has first-hand experience of using it in other than the prescribed manner. Two years after starting the suboxone treatment, Mary had a craving for heroin. She stopped taking suboxone for three days, then got heroin. She used it for two months, then one night decided to go back on suboxone before being in withdrawal from the heroin. That is not the prescribed method of treatment. “I felt the heroin on one side of my head, suboxone on the other,” she says. “I had seizures, sweating, vomiting, shaking. I was speaking a different language.”
She hasn’t tried that approach again. From 2 1/2 pills a day five years ago, when she first saw Nazario, Mary is down to half a pill (4 milligrams) a day. She’s following doctor’s orders. Thus far, she says, everything has been fine. “I’ve never gotten high from it,” she says. “I’ve heard you can. I don’t know how.”
In fact, the secret of suboxone, according to those who recommend and prescribe it, is that, while it is a morphine-like substance that provides an addict with a feeling of “normalcy,” it’s impossible to get high on it. Now widely prescribed to treat opiod dependence, suboxone is actually two drugs in one delivery system. Buprenorphine does the same thing for the brain that opiates do, thus the feeling of “normalcy.” The second drug, naloxone, prevents the high that comes from the opiods reaching brain receptors. For safety reasons, the delivery system itself has changed from tablets to a film that is placed on the tongue.
While a strong proponent of it, Nazario has no illusions about taking patients off suboxone. He says some patients do not have the willingness to try weaning off the drug. “I try to step them down slowly,” he says. “Some can take more withdrawal than others. We aren’t here to be martyrs anymore. If they don’t have the medicine, they suffer. They need the drug just to get by. I encourage them to try to get off. If they can’t, they can’t. The important thing is, the patient isn’t doing  anything illegal and is performing well.”
“My goal,” says Mary, “is to get off the suboxone, maintain my sobriety, keep going to AA meetings. I consider myself an addict. I don’t drink. I feel fine. No cravings, no side effects. I’ve been doing it very slowly.” Her doctor and people in recovery would say that’s the way to do it. I’ll keep you posted.

*  *  *
Doctors in New York state must take a special course to be licensed to treat patients with suboxone. When they are accredited, they are limited to 30 suboxone patients in the first year, 100 thereafter.
Dr. Rodolfo Nazario, of Middletown, who has been prescribing suboxone for 10 years,  says, because of the growing abuse of opiod pain killers, especially among young people, “We should be able to treat more.” He says he’s never had 100 patients.
He also is a strong proponent of the new state law that closely monitors prescription of pain medications by doctors. Some of the growing abuse has been attributed to doctors being too willing to prescribe addictive pain medications. “I hate to say it, Nazario offers, “but there are some physicians … I call them licensed drug dealers.”
Nazario also has some harsh words for insurance companies that won’t pay for suboxone treatment, but paid for the Oxycontin and Vicodin: “You make them addicts, but then won’t treat them.”

The fruits of Obama's Syria 'failure'

Putin on gays: A Russian fable

There’s an old Russian proverb that goes something like this: “How do you know when the president (prime minister, czar, party chief) is lying? His lips are moving.”

OK, so it’s not an old Russian proverb, but you get the gist. Today, it means if Russian President Vladimir Putin is speaking, the words emanating from his mouth are subject to change at any moment according to whatever he thinks will best suit his ultimate goal. That goal seems to be to consolidate his grip on power through whatever repressive measures he can get away with while pretending to support democratic principles of government.

So when Putin says, for example, that there is no discrimination against gays and lesbians in Russia -- despite recent passage by the Duma of a law banning any public mention of homosexuality that could be construed as propaganda supporting it -- one can assume it’s a lie. One can further assume that he thinks he has a good reason for making what common sense declares to be a bunch of bull.

That reason, of course, is the looming presence of the 2014 Winter Olympics in the Russian resort city of Sochi and Putin‘s desire to avoid a boycott of the games and/or worldwide condemnation of the Russian law and measures that might be taken to register protest against it. There are hundreds of millions of rubles at stake and Russia can ill afford to lose any of them. So don’t worry, folks, in keeping with the Olympic spirit that forbids discrimination of any kind, there will be no discrimination against gays and lesbians in Russia during the Olympics, Putin says,

And that’s what needs to be remembered. In Russia, Putin faces no serious challenge to his words from a free, vigorous press (he’s worked hard at squelching that) and, in this case, most likely has the support of a majority of Russians. In a country with a poor history of tolerance for minorities, few are going to point out any inconsistencies between his words and actions regarding homosexuality in Russia, during and after the Olympics.

President Obama, angry that Putin granted temporary asylum in Russia to Edwin Snowden, who made public voluminous files on the U.S. government’s efforts to spy on ordinary Americans and also upset that Putin has resisted taking military action against Syria for use of chemical weapons against its own people, canceled a meeting with Putin in Russia during this week’s G20 summit. Instead, Obama met with gay activists in Russia, a double insult.

No sweat for Putin. He softened his stance on Syria and said some of his favorite Russians --Tchaikovsky, for example -- were homosexuals and yet are still loved by Russians. Whatever suits his need at the time, the former KGB chief will say, usually with a smile.

The anti-gay law has led to calls to boycott the Sochi Games, but such actions always hurt far more than their intended target. In this case, thousands of athletes -- including countless gay athletes -- who have worked for four years for this honor would be denied what for many is a once-in-a-lifetime opportunity.

Gary Kasparov, former world chess champion and an outspoken Russian critic of Putin, says there are other ways to protest. In an interview with Huffington Post, he says the protest are not about the athletes, but rather “about Putin and his repressive regime.” He says world leaders (presidents, diplomats, royalty, etc.) should boycott the games, denying Putin their implied support for his policies and perhaps weakening his resolve to pursue similar ones.

Kasparov also thinks Olympic sponsors such as Coke, McDonald’s, Visa and other major companies should recognize the views of their main customers and express opposition to the Russian law by adorning their products with rainbow flags or other symbols of support for gays. And he says NBC and other broadcasters of the Games should use their freedom and their platform to do stories about, not only the anti-gay law, but other repressive measures taken by Putin. A little press freedom in Russia would not be such a bad idea.

Admittedly, a boycott of the games would be dramatic, but would likely only stiffen Putin’s us-against-the-world resolve and not sway Russian citizens, a difficult task under any circumstances. Moving the games from Sochi (now under martial law) is impractical given time constraints. That leaves broad public condemnation of Putin and education of the Russian public -- by previously mentioned means and the use of social media -- as the most effective way to make Putin eat his words. It may also wake up the Russians and make him less likely to pursue future oppressive measures.

There’s another old Russian proverb. Something about sleeping dogs and lying. OK, it’s not Russian, but you get the gist.