Is alcohol a problem? A test for teens 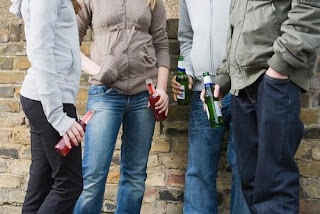 Summertime can be fun for teenagers. For starters, there's no school for most of them. And, even if they’ve got a job, there’s plenty of time to hang out with friends. Go to the beach. Movies. Parties.
But lots of free time and limited responsibilities can also come with risks, especially if the fun often revolves around drinking. The legal drinking age may be 21 in this country, but underage drinking is defined by the Centers for Disease Control and Prevention as “a major public health problem.”
According to the CDC: “Alcohol is the most commonly used and abused drug among youth in the United States ... and is responsible for more than 4,300 annual deaths among underage youth. Although drinking by persons under the age of 21 is illegal, people aged 12 to 20 years drink 11 percent of all alcohol consumed in the United States.” Much of that is binge drinking.
Along with those deaths, there are tens of thousands of alcohol-related emergency room visits by teenagers each year. Parental indifference to their children's behavior and the friends they choose or ignorance of the harm alcohol can do to young minds and bodies are key factors in the way many teenagers spend their free time. But teens aren't wholly clueless about their behavior. In fact, it's not unthinkable that a teenager whose social life revolves around alcohol has asked himself or herself if, just maybe, drinking is becoming a problem.
What follows may help answer that question. For teens wondering about their use of alcohol or other drugs, the National Council on Alcoholism and Drug Dependence has prepared a self-assessment test to help determine if they -- or someone they know -- is at risk and in need of help.
Remember, this test is for teens. Read each question carefully and be honest. Consider your actions over the past 12 months. Answer yes or no and be sure to answer every question.

NCADD Self-Test for Teenagers:
18. Do you think you have a problem with alcohol or other drugs?
Yes   No

The results
Number of Yes answers
Zero-2: May not be an immediate problem. Continue to monitor.


3-5: You may be at risk for developing alcoholism and/or drug dependence.  You should consider arranging a personal meeting with a professional who has experience in the evaluation of alcohol and drug problems.


More than 5: You should seek professional help. You may have a serious level of alcohol and/or drug related problems requiring immediate attention and possible treatment.


There are, of course, ongoing efforts to reduce underage drinking, including stricter enforcement of the law, advertising campaigns on the dangers of alcohol abuse by teens and school and community-based educational classes. These are all potentially helpful, but while the effectiveness of these efforts is being evaluated, a bit of old-fashioned, honest, self-assessment may be a teenager’s best defense.


A double dose of danger
Energy drinks, beverages that are loaded with caffeine, other plant-based stimulants, simple sugars, and other additives are popular among young people. The CDC says they are regularly consumed by 31 percent of 12- to 17-year-olds and 34 percent of 18- to 24-year-olds. When not abused, they may seem comparatively harmless, but they are also often combined with alcohol, resulting in a cocktail with potentially serious consequences.
According to the CDC:
bobgaydos.blogspot.com
b