My love/hate relationship with squats 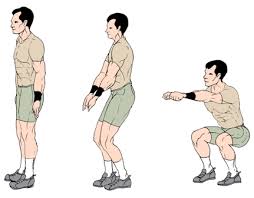 A while back I started writing about lifestyle changes I’ve made since I retired from daily newspapering.  A new diet, low on sugar and salt, no red meat, high in vegetables, fruits, fish, nuts and Greek yogurt (frozen and not). A regular (more or less) exercise/workout regimen. Vitamin supplements. I feel, look and am a lot healthier than when I embarked on the changes.
I’ve also discovered something about life: There is no statute of limitations on it offering stuff for which I have no love. For example, I used to hate trigonometry. I could do it, but who decided we needed it? Also, I was not a fan of creamed spinach. Whose idea was that?
I don’t hate either anymore because I don’t have anything to do with them anymore. In college, I decided (with the strong suggestion of a faculty adviser) to pursue writing as a career instead of engineering. So I retired my slide rule (remember them?), abandoned sines, cosines and tangents, and plugged in my electric typewriter (remember them?) to focus on spelling, punctuation and good grammar (please remember them).
Creamed spinach was a non-starter at our first encounter. I hated it. Today, however, raw or sauteed spinach is welcome in my diet.
Today, I have something else to hate: Squats.
For the uninformed (or possibly out-of-shape), that’s a physical exercise, not a vegetable. If you can only do one exercise, it’s the one to do because it works so many different muscles. At least that’s what my fitness coach keeps telling me.
Yes, I have a fitness coach, another step in my evolution from layabout slug to septaugenarian with his eye on 100. She’s also my partner. Once a week, my partner/coach and I do an hour-and-half weight-training regimen -- dumbbells, weight machines, rollouts and squats. (I’m not overly fond of rollouts either, but let’s stick to squats for now.) The dumbbells have slowly increased in weight with time and with my development of some actual muscle.
Honestly, the workout is not yet what I would call fun. Maybe that’s why they call it a workout. Still, with increased strength overall has come increased self-confidence and I do like the results.
But squats are a killer. And, not to make excuses, I came to the exercise with a couple of physical issues. My right ankle is fused as a result of being shattered in a game of touch football many years ago and my left foot and lower leg experience varying degrees of numbness due to diabetic neuropathy. Bottom line: My squats won’t look like your squats because of necessary adjustments.
Whether my leg issues make my squats any harder to do than they are for someone without such physical issues, I don’t know. It’s not important. I do know I couldn’t manage even one squat the first time I was asked to do so. I kept losing my balance and falling over. This was embarrassing and frustrating and the root of several arguments between me and my partner/coach.
Gradually (and with considerable difficulty and complaining), I managed to do a couple of squats without falling over. It has been a slow go since then, with considerable adjustment. When we started working with a bodybuilding trainer in a well-equipped gym a year ago, I used the solid, metal legs of a chinning bar to help keep my balance as I went up and down with grunts and groans. There was also a full-length mirror that I could look at and remind myself to keep my head up and not bend over. Most of the time, I used it to check and make sure I was still breathing.
Recently, I groaned my way through 20 squats without using anything to keep my balance, took a break, and did 20 more. Wiped out. But not done. The trainer -- whose job is to always think you can do one or two more reps of whatever the exercise is -- has added a new torture. I do squats while holding a metal bar over my head while he and my partner hold the ends to make sure I don’t fall over and injure myself.
I did 20 of these the last time and could barely walk when I was done. As I write this, my legs have still not fully recovered and my glutes are periodically achey. My partner/coach says it’s all good and she likes the new muscle tone in my legs, as do I. I also confess to a feeling of accomplishment for having survived, if not conquered, the challenge of squats.


Don’t get me wrong. I still hate them. It’s hard to believe I will ever feel otherwise. But I’ve learned (late in life, as with all my lessons), that I can survive and even benefit from something I hate. Besides, for now at least, no one can say of me, “He can’t do squat.”

Three questions in the wake of whatever it was that just happened in Iowa:
Let's start with Hillary. As far as I can tell, after 16 years (at least) of running for president, the only message I still hear is that Hillary should be president because she's been around, she wants it and it's her turn. She's been patient through Bill's years in the White House and she's been running ever since they had to vacate (penniless, I believe she initially claimed).

Yes, she took time to serve as senator from New York, but that really was necessary to fill out the resume for a presidential run. Being secretary of state was a bittersweet consolation prize for losing the 2008 Democratic presidential nomination to Barack Obama, who apparently never got the memo that it was Hillary's turn to run. It certainly topped off her resume.

Yet all I hear is that she's really smart, has a lot of experience, knows a lot of stuff and will do a good job of running things. Now, that's clearly more than can be said of pretty much all of the Republican presidential candidates, but she's not running against any of them yet.What is she going to do as president? What is she going to change about a system with which Americans of all political persuasions are disenchanted, to say the least? Maybe it's me, but all I hear is that she'll do a good job, even a better job, of managing what Obama leaves behind.

A lot of the major media seem to have bought into this message. That was pretty much the essence of the New York Times editorial endorsing Clinton over Bernie Sanders in the Iowa primary. Hillary has the experience to carry on the way we have been carrying on.

Unfortunately for Clinton, the New York Times, and other establishment media that support her candidacy, a lot of Americans don't seem to want to carry on the way we've been carrying on. That's undoubtedly why a lot of young people, not thrilled with the future being crafted for them, have flocked to the Sanders candidacy.

In fact, it seems to be why a lot of people have flocked to a host of Republican candidates who are anything but establishment figures. The fact that virtually all of them aren't qualified to be president is another matter.

For what it's worth, I think Obama has done a pretty good job cleaning up the mess left by Bush/Cheney. He's done this in the face of non-stop resistance from Republicans from his first day in office. There's no reason to believe that Clinton, no favorite of congressional Republicans, will have any easier time of it in that regard. Furthermore, her ties to the banking industry and corporate America (through Bill and the Clinton Foundation), cast serious doubt on any claim she might make that she is different from Republicans. (Her claim the other night that she is not part of the Democratic Establishment is laughable.)

And, as I recall, she couldn't get her healthcare plan through a Democratic Congress in Bill's first term. How does that make her a manager who "gets things done"? It's a claim that much of major media have apparently accepted as fact because she and her supporters keep saying it:
Why Hillary? Because she's a manager.

Sanders, by contrast, is an "eccentric" senator with "unruly" hair, as he was characterized in an Associated Press story the morning after the Iowa caucus. This was supposedly a straight news story reporting on the outcome of the caucus. There were no adjectives attached to Clinton's name implying some not-so-subtle judgment. Where were the editors?

Again, maybe it's just me, but when someone writing in Iowa describes Sanders, with a lifetime in public service, as "eccentric," I can't help but wonder if it's code for 74-year-old Jew who still speaks with the accent of his native Brooklyn. New Yorkers are pretty good at cracking codes.

As for that Iowa vote, what a joke. Clinton claimed victory after edging Sanders by less than three-tenths of a point. Democrats don't even vote privately in Iowa. They stand in opposite corners and try to convince others to join them. The biggest group gets the delegates from that district. When there's a tie, they split the delegates -- two for you, two for you. But when there's an odd number of delegate at stake, the odd vote is awarded by flipping a coin. Clinton won six out of six flips -- go figure -- so she got a couple more delegates than Sanders. That is no smashing victory!

Even here, major media (NPR even) felt it necessary to weigh in after the fact to educate us that Clinton didn't win Iowa on coin flips. Rather, they spelled out the entire ridiculously and unnecessarily complicated system by which Iowa Democrats award convention delegates. Seems there's county delegates and state delegates and who-the-heck cares delegates and formulas for calculating percentage of delegates. It's a system set up by the establishment to try to control the votes, so that candidates like Bernie Sanders, from Brooklyn via Vermont, can't win.

But he did. The "virtual tie" was a statement for Sanders against the establishment -- Democratic Party and major media.