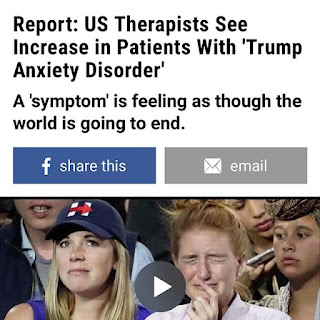 Donald Trump is messing with my journalistic instincts. How do I know? Well, I never got past the headline of the Facebook post that informed me psychologists were diagnosing something new among their patients, informally called TAD -- Trump Anxiety Disorder.

I never bothered to read the article. Of course they are, I said to myself. What took them so long? The whole damn country is suffering from it. We’re one, big, herky-jerky mass of resentment and anxiety just waiting for the next tweet to make us great again. Or have us at each other’s throats.

I recognize the symptoms in myself every morning when I wake up and remember that the sorry excuse for a human being called Trump still lives in the White House and millions of Americans are apparently OK with that. I’ve also been told that acceptance is the key to serenity and that I don’t have to like the situation to retain my sanity, just accept that it is. So I’ve now given up trying to figure out or reason with the Trumpsters. The universe and history will deal with them.

But as someone who has been trained and conditioned over time to write about such things as a colossal upheaval of the moral underpinnings of the supposed defender of democracy, equality and justice on the planet (i.e. the United States), I also feel obliged to try to write despite the angst. To report, if you will, on the latest outrage. But really …

It’s all different, yet all the same. Follow the bouncing ball. Three-card Monte. What did he just say? So, while I may have Trump Anxiety Disorder, I think I’m also suffering from what the mental health professionals call a co-occurring condition -- Trump Fatigue Symptom.

It’s downright tiring writing the same thing over and over again: Dotard did/said something dumb or cruel, or both. Then he lied about it. Republicans didn’t care (they’ve committed suicide) and his loyalists cheered. End of story.

The end of story I’m hoping for, of course, is one written by Special Counsel Robert Mueller: Trump led out in handcuffs, along with his family and cronies. But I’m also looking for a good read in a chapter to be written in November — the midterm elections. If there’s not a big Blue Wave vote for Congress, TAD will become epidemic I fear.

Meanwhile, someone who cares about me and is curious about the true meaning of life (it's not politics or baseball, I’m told), has steered me to some people who seem to have a pretty good handle on it. Eckhart Tolle. Mooji. Rupert Spira. Deepak Chopra. Tom Campbell. Thanks to YouTube, they are helping me to change my outlook, maybe even lower my anxiety level.

The key is simply to be, these enlightened men say. I am not my thoughts. I am not even my body. Consciousness (not the Dotard) is in charge. All I have is now. Be present. (Have lunch with my sons.) Meet everything in the moment. Be aware of being aware. (Do all-you-can-eat sushi every Sunday.) Lower the entropy (disorder) in a system (consciousness) and increase the cooperation, order, caring, even love. There are no coincidences.

This is all a virtual reality, says Campbell, a physicist. In that case, I want to be the player in charge of the Dotard’s avatar. I think I could bring plenty of energy to that experience, appreciate every moment and lower the entropy of the entire planet.

Addiction and Recovery
By Bob Gaydos
What many parents the world over have been proclaiming for quite some time is now official: Some individuals -- mostly young males --- are literally, not just figuratively and annoyingly, addicted to playing video games. That is the determination of the World Health Organization, which after considerable study and debate, recently added gaming disorder to its International Classification of Diseases, a primary source of information for doctors worldwide.
The United Nations agency did not put a time frame (how many hours a day) on what would be considered addictive gaming, but rather, put video gaming in the same category as gambling addiction -- a behavior that becomes “a priority” and which the individual is unable to stop despite numerous negative life consequences. These include loss of a job, loss of friends, broken relationships, poor health, bad grades and other assorted issues that might arise for someone who played, say, Fortnite, the current video game rage, for 14 to 16 hours a day while neglecting work, school, food, sleep, family, friends, showers … real life.
While this classification might seem overdue to some, it is not without controversy. For one thing, the W.H.O. zeroed in on video gaming, both online and offline, but did not include use of the internet and smartphones, which certainly are vehicles for obsessive behavior. For another, the American Psychiatric Association did not include gaming in the fifth edition of its Diagnostic and Statistical Manual of Mental Disorders, choosing to call it a "condition for further study."
Some critics of the WHO classification suggest that gaming was targeted because of heavy lobbying by some countries, such as China and South Korea, which have large populations of video gamers and are desperately looking for help in treating them. But some mental health professionals say official WHO designation could improve public education, research, insurance coverage and development of treatment programs, which at the moment are scarce and expensive. They say including the gaming industry -- with its legion of experts on creating reward-and-reinforcement scenarios -- in the conversation can only help.
Not surprisingly, most creators of video games (who have an economic motivation to be considered) and their legion of players responded negatively to the classification, arguing with the methodology of some studies and saying the results have been far from conclusive. They also say studies on gaming are relatively new and note that some studies have shown benefits to playing video games, including improved thought processes (lots of strategy to figure out), greater motivation (lots of levels to reach and competition to be won), and improved memory and hand-eye coordination (essential for good gaming). In these regards, they say, gaming is akin to young people playing sports or joining clubs.
Finally, there is also disagreement among mental health professionals about whether the gaming is the cause or the effect of such common co-occurring disorders among obsessive gamers as anxiety and depression.
Still, whether it is an official mental health disorder or one deserving further study, no one argues that playing video games to the point that the player suffers negative consequences in other areas of life is good for one’s health. So, while the APA has not classified gaming as a disorder, it has come up with nine criteria for identifying it, should it make that official decision. They are similar to those used to identify other officially classified addictions:
Obviously, the more “yes” answers there are, the more likely the individual has a problem with video gaming, whether it’s labeled an official addiction or not. Denying it out of shame or guilt or fear won’t help. In fact, the WHO classification is intended to eliminate those obstacles and provide an avenue to help. If the video gamer has trouble stopping or cutting back, consider consulting a professional addiction counselor.
There is also help available online from those who understand the problem because they’ve been there:
-- On-line Gamers Anonymous, a 12-step, support and recovery organization “for gamers and their loved ones who are suffering from the adverse effects of excessive computer gaming”: olganon.org
-- Computer Gaming Addicts Anonymous (CGAA), “a recovery fellowship, based on the model of Alcoholics Anonymous”: cgaa.info.
Whatever you do, be honest. If you or a loved one are talking about it, if it is a cause for concern, if it has caused problems, then it’s a problem, official addiction or not. Don’t wait for the debate to be resolved.
It’s all in the game
bobgaydos.blogspot.com