Close encounters of the remarkable kind 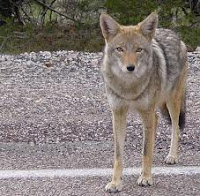 By Bob Gaydos
I saw a coyote the other day. Not on television, but about 150 feet in front of me. I was sitting in my car, having my morning coffee-and- newspaper fix (old habits) when I caught a glimpse of something moving on the road in front of me. The road is a quiet one that parallels a state highway on one side and a corn field on the other. No houses, businesses or other distractions. A rare hideaway in a suburbanized world.
That’s probably why the coyote sighting surprised me. The animal came out of nowhere -- actually, it would have to have been from across the busy highway to my left -- and moved purposefully across the road and into the corn field on my right. It took maybe 10 seconds, not long enough for me to realize what I was seeing and grab my camera from the backseat. So you’ll have to take my word for it.
The scraggly looking critter -- and they are particularly ugly animals -- disappeared into the corn and out of my life. I have since returned to the road for coffee and contemplation. But thus far no coyote. Not that I really expect a revisit. Then again, I never expected the first one.
At the same time, I have been thinking how remarkably unremarkable the brief event was -- Hey, everybody’s seen a coyote around here -- and yet how unremarkably remarkable it was -- Really? Everybody’s seen a coyote around here?
I think it was just plain remarkable, though I haven’t figured out precisely why.
For starters, I guess, it gives me something a little offbeat to throw into conversations when I don’t feel like talking politics.
“Hey, Bob, what did you think of that Republican debate the other night?”
“Yeah, you know what? I saw a coyote the other day -- middle of the morning, big as life, right in front of me, ugly as could be. Ran from the highway into the cornfield. Where the heck did he come from? How dangerous do you think he might be? How far do they travel? What are they doing down here anyway? Are they instinctual survivors? Do they eat cows? Can people shoot them legally?”
Good political questions all, turned masterfully into environmental musings.
The coyote sighting, plus my firsthand experience with the earthquake -- sitting in my car again, in front of my home, listening to two idiots on a talk radio sports show discuss the Mets for some reason, when the car starts shaking back and forth like it’s in a Category 3 hurricane, then repeating the scenario a few seconds later -- are godsends for future social chitchat. No harm, no foul, plenty of aww shucks.
But is that remarkable? Or just luck?
In any event, it got me thinking about the unpredictable encounters we have in our lives every day and how they affect us, or not. For example, I stopped in at QuickChek for my morning coffee recently and was struck by the sound of a loud, female voice engaged in earnest (although clearly not a business) conversation. This was over the sound of the piped in music and usual hum of store business. Scanning quickly, I spotted the culprit, in a far corner, cell phone to ear, oblivious to her decibel level and intrusion into other people’s lives. I later spotted her on line, still talking into her cell phone and cradling two half-gallon-size fountain drinks in her arms. I may have said a prayer of gratitude that I didn’t know her.
On the other hand, a few days before Madame Megaphone and the coyote, I was starting my coffee routine at QuickChek when I noticed a gentleman of a certain age -- you know, mature -- swaying and bobbing in perfect step to the piped-in music as he added sugar to his coffee. He was smiling too, broadly, and I swear he was humming.
“You’re having a better morning than I am,” I volunteered.
“He woke me up this morning,” came the happy reply.
Say what you want about the value of living life with a positive attitude, people do not often invoke Him in public -- certainly not in a convenience store to strangers -- in order to explain their joyous attitude. And this gentleman was indeed joyous. I’d said I felt cranky. My bones. He said I could talk to my bones and change that.
Remarkable.
He even let me go before him in line.
Total honesty: I had a much better day after that encounter and, like the coyote, I’ll probably never forget the joyous gentleman, although I do look for him in QuickChek every time I give them some of my money.
And if Madame Megaphone returns, as I fear she will, I will do my best to tune her out and tune in to the piped-in music. Let’s hope it’s upbeat. If you happen to see me there with a cup of coffee, humming with a dumb ass grin on my face, I’m probably having a good, if not joyous, day. I’ll be heading out to my road to catch up on the news and wait for the next coyote.
bobgaydos.blogspot.com
Posted by Bob Gaydos at 9:45 PM