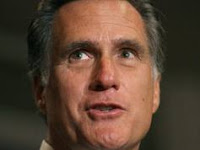 By Bob Gaydos
Don’t look now, but the flavor of the week for all those frustrated, angry, eager-for-change Republicans is … vanilla.
Not cherry vanilla or even vanilla bean. And no, sorry Mr. Cain, despite all the high-profile attention you’ve been getting from the media of late, not “black walnut with substance.” Plain old vanilla, aka Mitt Romney, is looking more and more like what he has acted like from the beginning of the tortuous Republican presidential primary process -- the eventual GOP nominee.
That won’t be because he has captured the imagination of the party faithful (whoever they may be), but because none of the other colorful, imaginative GOP candidates has offered anything close to a resume that screams. “Pick me! I know how to do the job.”
The anyone-but-Romney crown within the GOP had a rough couple of weeks as two of their more prominent, colorful potential candidates both opted not to run. Chris Christie, the larger-than-life governor of New Jersey, who likes to beat up on teachers, has regularly insisted he was not a presidential candidate, but apparently felt obligated to consider the pleas to run one more time when all the vanilla-haters in the GOP begged him. Mr. Rocky Road said thanks, but no, once again.
And Sarah Palin, the hot fudge sundae who has been running away from political office ever since she was John McCain’s partner on the 2008 losing ticket, proved she is smarter than a lot of folks (me included) give her credit for, by saying she’s not running for president either. Clearly, it’s much easier to travel around the country on a spiffy bus, picking up hefty speaking fees than having to campaign for office, never mind actually governing that country.
On her way out, Palin tagged Cain (erroneously calling him “Herb,” not Herman) as the next flavor of the week because Minnesota Rep. Michelle Bachmann, a make-up-your own-sundae candidate, had fallen out of favor when Texas Gov. Rick Perry jumped into the race. But Perry quickly went from being the favorite anti-Romney candidate to melted butter pecan after terrible debate performances. Apparently even Republicans have lost a taste for affable Texans who don’t know what they’re talking about.
That leaves Rick Santorum hanging around, even though almost nobody’s buying what he’s selling, along with Newt Gingrich, and no one’s going to buy any ice cream called Newt. And of course, Ron Paul, the Libertarian in Republican clothing, is still in the race. He’ll never drop out and could even get flavor of the week some time, but when he goes all soft-serve on the wars in Afghanistan and against drugs the GOP hardliners will go soft-serve on him. But mostly, it will be because they’re not sure what flavor he really is.
This, we are told, leaves Republicans with Cain and Romney. Republicans love colorful, tough-talking, no-nonsense businessmen who are convinced they know how to do what the “professional politicians” don’t. Ross Perot. Donald Trump. Steve Forbes. They made their fortunes in business (the latter two with the help of Daddy) and, by golly, they could do it in the White House, too. Or so they said.
But they couldn’t get the nomination because they couldn’t do what politicians have to do in order to succeed -- understand the concerns of all the people and work with those who hold different views for the greater good. It is not just a matter of telling employees what to do in order to improve the bottom line. It is more a matter of improving all citizens’ bottom lines and, by the way, getting along with the rest of the world.
Perot ran as an independent, and a paranoid one at that. Trump was always just a TV act looking for ratings. Forbes proposed a flat tax on all Americans and said that would straighten out all our problems, not just the budget. He never got why that was unfair to those who were not born rich.
Cain has a version of this with his 9-9-9- plan. He also doesn’t understand why a 9 percent national sales tax on everyone disproportionately hurts those without a lot of money. Plus, it’s a tax, isn’t it? How is that Republican? He’s a black man who likes the up-by-your-own-bootstraps argument, which endears him to a lot of Republicans. Of course, he had parents who worked very hard to get him and his brother into college, where they could get the education to help them succeed. And for those who joke that President Obama (who didn’t see his father after age 10) never even delivered a pizza, Cain didn’t start at the bottom at Godfather’s Pizza; he came in as the boss and made it a success before selling it.
But Romney is also an incredibly successful businessman, who was also governor of Massachusetts and the guiding force behind the Winter Olympics in St. Lake City. He has had to deal with differing opinions and learn about compromising and raising revenues to keep things running. He even got a health plan passed for the good of all Massachusetts citizens. Unfortunately for him, these are seen as negatives by people who belong to one of the many vocal factions driving Republican politics these days, including the tea party folks. They dominate public debate and straw polls.
So Romney, who might really be more Neopolitan ice cream (vanilla, chocolate and strawberry), has stuck to plain vanilla until now so as not to seriously offend any of those factions and lose the nomination. (See: John McCain in 2008) In return, they have accused him of being a member of a cult, because he is a Mormon, and two-faced, because he won’t absolutely, positively toe the line on not taxing the rich. At the Republican candidates debate Tuesday, Romney said, “I'm not worried about rich people. They are doing just fine."
Geez, Mitt, that sounds almost vanilla bean. Or Democratic.
Posted by Bob Gaydos at 12:19 AM