Here's looking at you, Newt 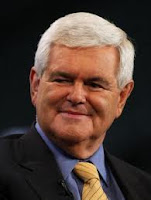 By Bob Gaydos
Having restored a sense of inevitability to the demolition derby known as the Republican presidential primary campaign, Vanilla Ice, a.k.a. Mitt Romney headed west from Florida with his sights set on the big payoff in Las Vegas. That may sound un-Mormonlike, but we’re talking votes here, not dollars. Besides, Mitt’s got more than enough cash on hand to buy the nomination on his own.

Before we get to Nevada, though, there are a couple of what should have been obvious facts worth mentioning in the wake of Romney’s thrashing of Newt Gingrich (photo) in Florida:
Let’s go with the pig first. Gingrich, of course, if famous for shooting his mouth off and making outrageous comments, which he stands by in the face of immediate criticism, but has been known to deny far enough into the future. He has said, for example:
And so it should not have come as a shock to any Gingrich watcher to learn that, in Florida, coming off his defeat of Romney in South Carolina, Gingrich supporters unleashed a robocall campaign on primary day, aimed at the Sunshine State’s large Jewish population. Here is what the call said, verbatim:

“As governor of Massachusetts, Mitt Romney vetoed a bill paying for kosher food for our seniors in nursing homes. Holocaust survivors, who for the first time, were forced to eat non-kosher, because Romney thought $5 was too much to pay for our grandparents to eat kosher. Where is Mitt Romney's compassion for our seniors? Tuesday you can end Mitt Romney's hypocrisy on religious freedom, with a vote for Newt Gingrich. Paid for by Newt 2012.”

The truth is that, as governor in 2003, facing a budget deficit, Romney vetoed a bill that would have added $600,000 for nursing homes
to allow them to continue to cook kosher meals on site. The veto simply meant they would have to bus in kosher food that had been cooked elsewhere. No kosher food was denied and Romney did not cut the budget, he just kept it the same. And the nursing homes had proposed bringing in the kosher food themselves. In the end, the legislature overrode the veto.

So, total falsehood. Gingrich, of course, denied any knowledge of the call, however, campaigning Saturday, three days before the vote, he told a crowd, that Romney had "eliminated serving kosher food for elderly Jewish residents under Medicare."

Newt’s pandering in Florida even extended to outer space. Recognizing its large population of space industry workers (many of them out of work) he pledged that by the end of his second term in office, the United States would not only have a colony on the moon, but he would actually fight for a “Northwest Ordinance for Space,” allowing the colonists to petition for statehood when their numbers reached 13,000.

Setting aside Puerto Rico’s longstanding claim to be the 51st state and the hundreds of billions of deficit-bulging dollars Newt’s moon colony would cost, Republican voters in the county heavily populated by space industry workers gave Romney a 7-point victory. Statewide, Romney gained 46 percent of the vote in a four-man race, with Gingrich well behind at 32percent.

It wasn’t necessarily that Mitt was so much better a campaigner than he was in the three previous contests, as it was his super PAC spent about $12 million savaging Gingrich in TV and radio ad. But really, it was simply a case of Romney (or his surrogate PACs) giving Gingrich a taste of his own vile medicine. The ads returned the anger, hostility and nastiness Gingrich had heaped on Romney in South Carolina, with a dash of truth to make it all the more powerful.

Whereas the virtually all-white evangelical GOP voters of South Carolina chose to ignore Gingrich’s questionable character (serial adulterer, open-marriage fan, ethically challenged congressman), his penchant for rash statements with no regard for consequences (he will move the U.S. embassy in Israel to Jerusalem), his hypocritical anti-elitist/anti-establishment statements, and his smirky “I’m-smarter-than-you-so-I can-say-anything-I-damn-well-please, so there” attitude, Florida voters -- not so homogeneous or easily fooled -- took another look at Romney.
Instead of Mr. Vanilla, the cardboard cutout, the flip-lopping, multi-millionaire champion of the 21st century, they saw something else. As Jennifer Rubin wrote in her “Right Turn” blog for The Washington Post, Gingrich’s slash-and-burn campaign and the support it received from many conservative Republicans who hate Romney (including Herman Cain and Sarah Palin) “provided … Romney with the ideal opponent, someone so undisciplined, so erratic and so amoral that what had seemed to be Romney’s flaws (e.g. hyper-preparedness, a lack of ideological fervor, a Boy Scout demeanor) emerged as great strengths (soberness, executive skill, reasonableness, good character).”
It’s all relative.
As the campaign heads to Nevada, I still don’t know what Mitt Romney really is. I do know that South Carolina should never have been let back into the union. And Republicans have let Newt Gingrich make a mockery of their party.
bobgaydos.blogspot.com
Posted by Bob Gaydos at 4:26 PM