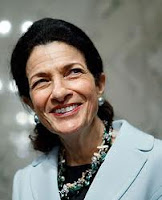 By Bob Gaydos
Having managed to insult and offend, in no particular order, women, immigrants, gays, union members, middle-class workers, college students and John F. Kennedy, the Republican presidential primary circus left Michigan and Arizona behind this week as it trudged on its dreary way with its sights set on Ohio and Tennessee and, ultimately, New York.
Don’t say you haven’t been warned.
After a scare in which it seemed for a while that he would actually lose the state in which he was born and his father served as governor, Mitt Romney barely prevailed in Michigan. Enough GOP voters there held their noses and voted for the I-can’t help-reminding-you-I’m-rich Romney rather than the God-is-on-my-side Satan-fighter Rick Santorum. Newt Gingrich continued to eat the furniture, but nobody paid much attention and Ron Paul was still a man without a century.
It’s enough to make a sensible, savvy, lifetime Republican politician proclaim, “Enough! I quit!”
Which is precisely what 33-year veteran Maine Senator Olympia Snowe (photo) did while her fellow Republicans were still voting in Michigan and Arizona. One of the very few voices of Republican bipartisanship in Congress, Snowe said in a press release: “Unfortunately, I do not realistically expect the partisanship of recent years in the Senate to change over the short term. So at this stage of my tenure in public service, I have concluded that I am not prepared to commit myself to an additional six years in the Senate.”
True, that statement does not specifically target her own party, but as one of the few remaining Republican moderates in Congress, she knows full well the dangerous turn towards the cliff that her party has taken. Snowe was the only Republican in the Senate to vote in favor of President Obama’s health care reform plan. Her vote helped get it out of committee to the floor for a vote. But she was the subject of such intense pressure and threats from the vocal rightwing fringe that has dominated the GOP of late, she voted against the plan on its final vote. That doesn’t mean she forgot what happened.
I have felt for some time that moderate Republicans -- the kind once referred to in New York as Rockefeller Republicans -- were in need of a new party. They have let the no-taxes-ever loonies usurp their party, its platform and its principles, forgoing the “compassionate conservatism” it once promoted for one that chastises the poor and rewards the rich, that emphasizes prayer and denigrates education, that discourages contraception and rails at food stamps, that celebrates only its narrow version of marriage, wants everyone who speaks a language other than English to go back where they came from and, far too often, acts as if it wishes women like Snowe would know their proper place in society. Which would not be in the U.S. Senate or in a military uniform, or probably not even doing scientific research in a major university for that matter.
There really is no place in today’s Republican Party for the likes of Snowe or her Maine Senate colleague, Susan Collins, also a Republican.
It’s time for a third party of disgruntled centrists from both parties -- Democrats have their partisan zealots as well -- that, unlike the Libertarians who idolize Ron Paul, could actually govern in the 21st century.
Indeed, as I was trying to focus my own thoughts on this issue, I discovered that Jonathan Chait of New York Magazine had already gotten there. In his Daily Intel blog commenting on Snowe’s retirement, he noted the specific nature of her statement. In particular, this: “As I enter a new chapter, I see a vital need for the political center in order for our democracy to flourish and to find solutions that unite rather than divide us. It is time for change in the way we govern, and I believe there are unique opportunities to build support for that change from outside the United States Senate. I intend to help give voice to my fellow citizens who believe, as I do, that we must return to an era of civility in government driven by a common purpose to fulfill the promise that is unique to America.”
Chait speculates Snow may be thinking of joining Americans Elect, a third party claiming many disaffected Republicans and Democrats, dedicated to avoiding partisanship and offering a civil form of governing, probably slightly more conservative than Obama’s. The party’s rules go so far as to require its presidential and vice presidential candidates to come from different parties.
Too idealistic, too wacky to succeed? Once upon a time, that’s what they said about the men who created a new party made up of those tired of the rabid pro- and anti-slavery rhetoric that dominated the day. That Republican Party has now badly lost its way. Snowe, and others who agree with her, should let the tea partiers and evangelists and assorted know-nothings do with the GOP as they will. Start a new party. And don’t make your constituents hold their noses to vote.
bobgaydos.blogspot.com
Posted by Bob Gaydos at 10:52 AM