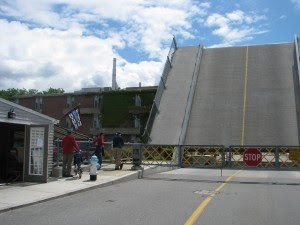 I wasn’t sure about filing a column this week. After all, there I was, sitting outside the Pie in the Sky in Woods Hole, Mass., drinking fresh roasted coffee and fighting off sparrows and blackbirds for my toasted buttered bagel, but I was alone. Bob Who Likes His Salad Sans Dressing wasn’t there to bounce ideas off. And Woods Hole itself is not a place to stir the stomach bile of a columnist. It’s too nice.

Woods Hole, at the tip of Falmouth on the near end of Cape Cod is probably best known for two things: It is home for the ferry to Martha’s Vineyard and it is also home for every kind of maritime, nautical research facility conceivable to man. If the word oceanographic or maritime is in the title, odds are the organization is poking around the waters somewhere in Woods Hole. Which means there are an awful lot of smart, healthy-looking people walking around town and gobbling up all the parking spaces. Some of them speak languages other than English. (I think it was French.)

Woods Hole is also one of those quaint coastal towns that has no problem expecting motorists and pedestrians to wait while a bridge is opened and raised on the main drag to let a couple of barely visible boats pass from the Great Harbor to Eel Pond (photo). They’re right. No one minded. Not even me.

So how was I going to get worked up enough to offer my two bits on the rest of the absurd world in which we live? Well, God bless the NATION & WORLD page of the Cape Cod Times. It didn’t take more than a few minutes on page 6 of the daily to wonder, for example, what ever happened to the Wisconsin of Russ Feingold, or for that matter Barack Obama in 2008. Gov. Scott Walker, a mean SOB if there ever was one, survived a recall vote by spending nearly $50 million convincing voters that public unions are evil. Then again, a former Wisconsin senator named McCarthy once had a lot of folks convinced every actor, writer and director in Hollywood was a communist.

Moving from Walker up the page, I noted with satisfaction that Abu Yahya al-Libi, the day-to-day director of Al-Qaida in Pakistan and the coordinator of operations with Al-Qaida affiliates, was killed in a drone strike by the United States in Pakistan. Seven of his friends went to meet Allah along with him. The Pakistani government protested the drone strike as an illegal violation of Pakistani territory.

I am told by some of my more liberal friends, maybe including some reading this, that I, too, should be offended by the drone strikes against suspected terrorist sites in Pakistan and elsewhere. I am not. I think we are still fighting a major war against terrorists and, while tying to avoid civilian casualties is essential, the drone strikes are a necessary and effective weapon. Besides, Pakistan showed its duplicitous nature by shielding Osama bin Laden for years and, in fact, has never fully committed to the fight against terrorism.

I am also told by, of all people, conservative Republicans, that President Obama, who has taken the mantle of commander-in-chief literally in regard to the drone strikes, by selecting and approving them personally, is somehow to be criticized for killing off Al Qaeda’s leadership. They think W. didn’t get credit for similar efforts. What that has to do with Obama escapes me. And only one of them actually got bin Laden.

Also on the page was a story about police in Indiana, who are scared to death that a private citizen might shoot and kill one of them while performing his or her duty — and get away with it. It seems Indiana has a law that allows citizens to use deadly force in responding to “unlawful intrusions” by a “public servant” to protect themselves and their property.

The public servant element was added to the law at the urging of, surprise, the National Rifle Association, which doesn’t see what the police are complaining about. They apparently can’t put themselves in the place of an officer, issuing a presumably legal warrant and maybe having to kick down a door to do it, having to fear that the person on the other side will open fire and later claim he felt threatened by the “unlawful intrusion.”

The only sensible approach, of course, is to presume police have the right to enter the premises and sort it out later — not to shoot them first and claim unlawful entry later. Indiana, with a Republican legislature and governor (Mitch Daniels), is alone in offering this “recipe for disaster” as the head of the Indiana State Fraternal Order of Police described it. But then, you can say that about most of the NRA-backed gun laws.

And there was one last absurdity — a typically American one — on the page. In Brooksville, Fla., a 275-pound “tamed” mountain lion escaped from its cage and had the neighbor’s pet beagle, Fester, for lunch. A pet mountain lion, you ask? Well, this is Florida and the mountain lion’s owner has a license for him. The cat’s owner, of course, blamed the dog, which has to be a new standard in blaming the victim.

He said, “You’ve got a big cat and you’ve got a dog that was after his food and he was going to stop that dog any way he could.” Of course he was; he’s a mountain lion.

The dog’s owner had a different take — he worried whether the pet mountain lion might break out again and eat his granddaughter. Maybe the NRA, which has a lot of fans in Florida, can write a law for the situation.

OK, that’s about it. Gotta go and find some fried clams for lunch.