Malala was the clear person of the year 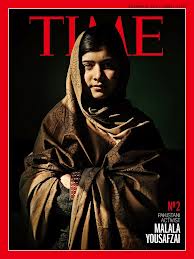 By Bob Gaydos
I finally got around to checking to see who Time magazine selected as the person of the year for 2012. Turns out the editors, who have been known to like surprise choices, went with the safe, conventional wisdom choice -- the leader of the free world, Barack Obama.
To which I say, in all humility, they got it wrong. Yes, Obama had a good year, but he was already president and he beat a chameleon to get re-elected. The clear person of the year, the person who made a profound impact on the world without being the leader of the most powerful nation ever to exist, was Time’s Number 2 choice  -- Malala Yousafzi. The 15-year-old Pakistani girl became an instant symbol of courage and hope and, I believe, a spokesperson for women’s rights worldwide, simply by refusing to bow to threats from Taliban terrorists and taking a bullet in the head as a result.
Malala, who survived an assassination attempt on a bus in her hometown and has been recovering in a London hospital, had already been an outspoken advocate for access to education for Pakistani girls for several years as a blogger before the Taliban decided that killing her was the only way to stop her, even though they expected public outrage. Instead, their botched attempt made Malala a worldwide heroine and sparked public protests in Pakistan for the very thing the Taliban fear most  -- educated women.
But something else has also happened, I believe. In neighboring India, traditional enemy of Pakistan, there were also demonstrations to support Malala‘s cause. And most recently, India’s culture of acceptable rape by gangs of men against women has given rise to large protests throughout that country as well as in Pakistan, where violence against women also has not been a major issue. Until now.
There is, I sense, a worldwide stirring for women‘s rights, most notably in countries where they have traditionally been ignored. These range from the widespread outrage in India over the death of a 23-year-old rape victim to the mostly symbolic, yet significant, appointment of 30 women to the previously all-male Shura Council in Saudi Arabia. The council is only advisory to King Abdullah, who made the appointments, but the move stirred protests by some Saudi clerics anyway. Saudi women have male guardians who guide their “decisions,” are not allowed to drive and will vote for the first time next year. Expect more pressure to speed the process of equality.
Back to India, where male children are much favored and abortion of female fetuses is still common, even though against the law. The public outcry over the gang rape forced authorities to reverse initial efforts to let the rapists go and punish the protestors. This is not India’s usual way of dealing with women. I think Malala has had a lot to do with that and with social media efforts to point out similar outrages by men in positions of power.
Even in the “enlightened” United States, political candidates, elected officials and judges have been publicly exposed for views on rape that can only be described as criminally ignorant.
Malala’s unique weapon is apparently an unwavering belief that what she wants -- access to education for all girls in Pakistan -- is unassailably right and, so, undeniable. She can see no other way. And her age provides certainty to her and, I suspect, a degree of shame to adults who agree with her but did not dare to say so publicly at the risk of their lives. She has no armies, navies, air forces or weapons of mass destruction at her call. She has no great wealth at her disposal. World leaders do not seek her out for favors. She is a teenaged girl with an innate sense of what is right and just, for women and men, and the courage to say so out loud.
As such, she has become the voice of millions of women, and men, around the globe. The person of the year beyond doubt.