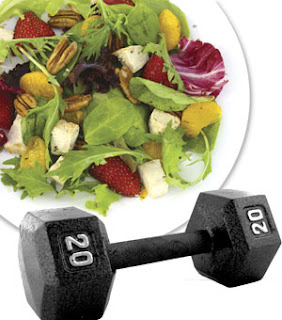 Last December, in a burst of, oh I don’t know, foolhardy enthusiasm, I wrote about my decision to re-enter the world of the healthy. No more sugar, salt, butter, red meat, French fries, etc. would pass over these lips. Knock off the bread; bring on the greens and beans. And Greek yogurt. Lots of veggies and brown rice and fruit. Some chicken and fish. And exercise, too. Plenty of exercise. I promised to give updates.
So here it is: I feel great.
People I’ve known for years come up to me and ask: “Did you lose weight?” Yes, 40 pounds. “Are you sick?” No, it’s intentional, thank you. “Are you working out?” Yes.
Oh my god, yes.
The thing about losing weight is that if you don’t do something to tone up your body, you wind up being a thinner person with a bunch of loose skin. Not a good look, and what’s the sense of losing weight and looking sick? I can say in all humility that I do not look sick. Believe me, it has not been a picnic. Nor has it been torture. It has been, as I said in my first report, humbling. But also surprisingly rewarding (to me, not my coach).
I mentioned starting out with weekly walks, one to two miles. I still do that, but not as often, due to physical conditions not related to what I’m talking about here. The walks are still good for the fresh air and sunshine, so they will continue.
It’s the inside workout regimen that is paying tremendous dividends. In December, I dismissed pushups with a “forget about it” comment. Could not do one. Did 60 the other day in six, ten-rep sets. (Even picking up the lingo.)  I also talked about crunches being the only thing I had some success with early on. Turns out that’s because I wasn’t doing them correctly. Effort counts, but so does form, my coach informed me. Now that I do them the correct way, they are much tougher. But the results are also more obvious. And I have learned such things as backward crunches (woof!) and bicycle crunches (we’re going to forget about them for a while).
Throw in weight training with barbells (progressing slowly but steadily), leg-lifts, leg-lowerings, squats, 40 minutes on a stationary bike and lots of stretching and, slowly but surely, muscle has appeared where once there was flab. It feels good. I feel good. I have more energy, more endurance and, in fact, a generally healthier outlook on life.
I can’t stress enough that none of this has been a surprise to my coach, who predicted the progress and encouraged me, gently or firmly, as needed.
As for the food, I am still learning, but no longer struggling, to find healthful, tasty, filling choices. I am not a fanatic. I have a slice of pizza from time to time (no pepperoni). I never finished the “Wheat Belly” book, but I try hard to avoid bread and gluten. I have rediscovered the sweetness of fruit and, bless their hearts, Ben and Jerry have introduced a line of frozen Greek yogurt that is as rich and satisfying as any ice cream. Better yet, they have competition in the slowly emerging market for more healthful food choices.
The fast food chains lag in this development, but demand could drive competition with them. Supermarkets are adding more organic and gluten-free sections as people (especially younger people) become more conscious of wanting to eat real food, with no surprises mixed in. Of course, I still can’t figure out food establishments that offer egg white entrees or veggie entrees and pair them with French fries or hash browns. Offer alternatives, folks.
Anyway, that’s my follow up report. So far, so good. Blood pressure in check. Weight down. Muscles emerging. Clothes too big (new wardrobe coming). A deep bow of appreciation to my fantastic coach, because I knew nothing about how to do this. And a final word to anyone who may be thinking about, “some day,” doing some exercise or losing some weight. Don’t wait. Life is really too short to waste on “coulda-shouldas.” Find a source of support and motivation and go for it. Change is not easy, but healthy change can be surprisingly rewarding in many ways. (I know, coach, not to you.)