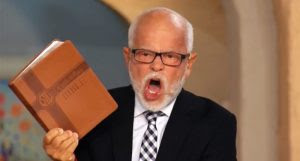 Jim Bakker, sticking with Trump to the end.


The good news is that I think I finally have a handle on this whole evangelical Christians love affair with Donald Trump. The bad news — and the apparent reason it took so long for me to get it — is that the revelation comes from Jim Bakker. Jessica Hahn’s former boss and philandering lover is not exactly on my radar screen.

Regardless, I’m grateful for the belated enlightenment. According to the TV evangelist, the Orange Dotard and the chaos he has loosed on the planet are all part of God’s plan. The End Times are approaching, people — can’t you hear the hooves of the Four Horsemen? It will all end in a cataclysmic war, or something, and the world will be saved with the second coming of Jesus.

Well, not the whole world. Just the Christians. And not just any Christians, just, you know, the good ones. The “true” ones who look like them and think all other people — and they do mean all — are sinners, blasphemers, heretics, etc. The rest of us will be left behind in the Rapture, with only true disciples ascending to Heaven. Evangelicals have believed in some version of this prophecy from the Old Testament for centuries and the fact that it hasn’t happened yet has never been a deterrent to new believers — or to preachers willing to exploit it to their own profit. The end is near; send me your money.

The key to my finally understanding the evangelical embrace of Trump, the most amoral, immoral, irreligious occupant of the White House perhaps ever, is realizing I had it backwards. It doesn’t matter to Bakker and other evangelicals (I understand some evangelicals disagree with him, but their silence is deafening) if Trump is a serial sexual assaulter, a racist, a bigot, a phony Christian, a liar, a thief, a purveyor of hatred and resentment. That’s all part of the plan. The worse Trump is, the sooner the holy war starts and the sooner Jesus returns to save us.

Well, not all of us. Just, you know, “true” Christians. So, to reserve your seat on the Greyhound to Heaven, send in yoUIKeyInputDownArrowur donations today to Jim, Pat Robertson, Franklin Graham (Billy’s son) or one of the others. This Old Testament prophecy now apparently serves as the basis of presidential policy, being digested at regular prayer breakfasts in the White House. Those breakfasts are attended by evangelical ministers, Trump, Vice President Mike Pence and other members of the Trump cabinet who profess a belief in the End Times theory.

The wisdom of our forefathers in separating church and state has never been more evident.

What’s not so obvious to me is, in this room of con artists, who is ultimately conning whom? The evangelicals latched on to Trump because he clearly has no use for the same people they exclude from their salvation story. He’s even apparently willing to use force or defy international efforts at cooperation to demonstrate his view. But his reasons are clearly not based on religious beliefs. They always have to do with him. He’s a con man. How can he benefit? In this case, he gets the evangelicals’ political support and votes, knowing they’ll support him no matter what, even though he doesn’t really believe their story. Because God sent him.

The evangelicals know that he knows. They know he doesn’t believe. That’s their con. In fact, that’s what makes their story more credible to them. A non-believer, they believe, will deliver them to Heaven by reclaiming Israel for the Jews, which is what they saw in Trump’s moving the U.S. embassy in Israel to Jerusalem — a move guaranteed to produce more conflict in the Middle East and one undoubtedly dreamed up at one of those White House prayer breakfasts.

Robert Jeffress, a Rapture pastor who attends those breakfasts, delivered the new embassy’s opening prayer. Jeffress has called Mormons heretics, said homosexuals are filthy, Islam promotes pedophilia and Jews are fated to hell. But, heck yeah, let’s pray for reuniting Israel anyway so that the holy war can start soon and we can get on with salvation. It’s all a matter of convenience, in my way of thinking at least. That’s the con. Whatever Trump does, it’s all God’s will. (Get those donations in; seats are filling up fast.)

Still, I’m not completely clear on what’s about to happen. Versions of End Times vary and Bakker himself seems to have confused the issue by saying God told him (Yes, he got it straight from the Source) that: “Donald Trump is a respite in this troubled times and I sent him in grace to give you time to prepare for what’s coming on earth. …”

“We have a president people think is crazy,” Bakker said. “They call him crazy, but he’s making peace treaties, he’s doing all the things to try to solve the world’s problems and God has put him on earth— God spoke to me the other night. He said, ‘I put Donald Trump on earth to give you time, the church, to get ready.’”

So, is Trump here to make peace or war? See what I mean by convenient?
I read the novel, “Left Behind,” many years ago out of curiosity. It’s the Rapture in paperback. As I recall, in the book a lot of people were surprised to find loved ones gone — empty clothes, idling cars, etc. — but they were still around. And there was some new, false Messiah offering peace to a troubled world. (Mike Pence may be auditioning for this role.)

So, if I’m looking for a happy ending to this morality tale being played out on Pennsylvania    Avenue, I can easily believe that Bakker et al got it wrong when they decided who and what was right. They conned themselves. That would mean, if the Apocalypse, etc. happens, Bakker, Trump, Pence, Graham, Jeffress, Robertson, Sarah Huckabee Sanders and most of Trump’s cabinet will be left behind to clean up their mess while the rest of us eat tacos and hummus and listen to Elton John in Heaven.

Either that, or the sound of hooves is Robert Mueller arriving on a white horse called Conquest. That’s in the story, too.