For the record: I am not an old coot

B
This is an old coot, according to society.

My chiropractor called me an old coot recently. At the time, I was lying on his table on my stomach while he used a snappy tool to somewhat painfully but successfully loosen my upper back, so I didn’t say anything. Out loud.

To myself, I said something along the lines of, “Who the hell is he talking about?“ Only it was a bit more vulgar.

For the record, I am not an old coot. Nor am I an old codger. At 79, yes, I guess I am chronologically old. And I have in the past been called a curmudgeon. You can’t be a young curmudgeon.

You can, however, be a young whippersnapper, Doc.

Some definitions are in order before I talk about ageism.

An old coot, according to Oxford Languages, is “a foolish or eccentric person, typically an old man.”

The Longman Dictionary of Contemporary English goes further: “An old man who you think is strange or unpleasant.”

The term, “old codger,” which some think is the same as old coot, is not. According to the Free Dictionary, “old codger” is “used affectionately to refer to an eccentric but amusing old man. codger. graybeard, greybeard, old man, Methuselah — a man who is very old.”  It sounds a bit less insulting. But it’s not.

Curmudgeon, according to Merriam-Webster, is “a crusty, ill-tempered, and usually old man.” Dictionary.com defines it this way: “A bad-tempered, difficult, cantankerous person.” No age is mentioned. However, other dictionaries pretty much define it as a stubborn, cranky old man. Your pain-in-the-butt, “Get off my lawn!” neighbor.

I plead not guilty to all three.

Back to the chiropractor. The label was applied to me with a slight chuckle in his voice, suggestive of the foolish or eccentric person category. The conversation that prompted it revolved around me not doing something or other which others felt would be in my best interests. The term is presumably meant to be affectionate, but it’s dismissive. It suggests that the older person in question is incapable of making rational decisions for himself and for his own benefit, or that he simply cannot occasionally make an unwise decision on his own. That sometimes he’s just a.dumb ass. No, the term suggests that he does what he does because he’s a foolish or eccentric old man. An old coot.

This assumption was further borne out when the chiropractor asked my partner to make sure I filled out my Medicare form before the next visit even though I was seated a mere 8 feet away from him and within hearing distance. Again, dismissive. By the way, I have excellent hearing.

Now, it’s possible that I am being overly defensive about this incident. It has been suggested that I sometimes take things personally. And I know the chiro meant no harm and he’s helping this old body to be more flexible. But I feel that at a time when the guy I already voted for for president is 78 years old, the guy I never want to be president is 74 years old and the guy I would’ve preferred become president is 79 years old, someone has to stand up for people who have lived three-quarters of a century and are still contributing to society. And I don’t necessarily think that those with maybe half a century of experience are the best judges of the capabilities of septuagenarians.

Call it personal. That’s the curmudgeon in me. I’m not suggesting that there aren’t foolish, cantankerous, eccentric, cranky, stubborn old men out there. I know some and I think most of them were probably that way when they were young, too. I don’t know what you’d call them. Sir, maybe.

And yes, I have my moments. But so do we all. It’s the old coot label I object to and the assumption that comes with it that this is a person not to be taken seriously because he’s old. He’ll be fine. Help him find his slippers.

I picked on the chiropractor because actually he’s the only one who’s ever called me an old coot (so far), but his remark was, I think, simply reflective of a lot of people's attitude towards older men. This is especially true about older men who still have opinions about things and are not hesitant to express them. Yes, that would be me and that’s where the curmudgeon label comes from.

The closest I can come to for a similar term for women is “old biddy.” You don’t hear that used a lot because women today won’t stand for it, for good reason. It’s dismissive and insulting and most likely used by people who have no clue about what the woman who just annoyed them is really like. She’s just an old biddy. Labels are risky business. 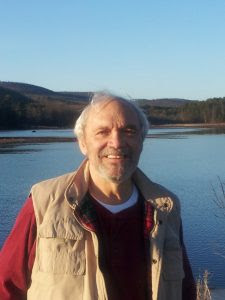 This is not an old coot.

One more thing about old coots. If you have any doubts about whether the term is really insulting, just Google “old coot” and click on images. It’s not a pretty picture. The drawings and photos are remarkably similar in their unpleasantness. Not one distinguished or even normal-looking older man among them. This is how society sees old coots — weird-looking, gnarly, even threatening old men. Someone you might run from rather than go to for mature counsel. So yes, it’s personal.

I speak here for all men of a certain age and mindset. I may occasionally say or do something that annoys you. If so, I apologize in advance. I’m human. But there’s still a well-functioning brain behind this (hopefully) non-threatening facade. So save your labels for your jelly jars. I am not an old coot.

Bob Gaydos is writer-in-residence at zestoforange.com.