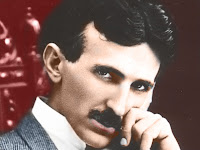 “Nikola Tesla,” my friend Ernie said. “He should be on the list. He invented electricity and radio; he just didn’t get credit because he was a terrible businessman and didn‘t know how to promote himself.”

All true, and to which I might add, he had the good sense to be friends with Mark Twain, whom Beth Quinn says definitely belongs on the list.

The List, as I will henceforth call it, giving it capitalization for added prestige, is a collection of the 20 most influential thinkers of the 20th century and beyond. As I wrote previously, a couple of friends of mine had been talking about such a list and asked me who would be on mine. Given the choice of writing about fracking or why we are such a nation of hypocritical, self-important, narrow-minded bigots, I preferred to think about thinkers. I stopped my list at 29 and asked for other suggestions. Hence, Tesla and Twain, both of whom I would agree have merit.

To be accurate, Tesla gave us the alternating current system, which makes all of this possible today. Edison, (also on the list) preferred direct current. He was also a master of self-promotion, which is not necessarily bad thing. For example, Tesla sold his AC design on the cheap to Westinghouse, who got rich on it, while Tesla eventually wound up impoverished and, some said, a little nutty. His critics pointed to Tesla’s “death ray” as evidence of his instability. But Tesla, a militant pacifist, called it a “peace ray.” Unveiled in July of 1934, The New York Times reported that the new invention "will send concentrated beams of particles through the free air, of such tremendous energy that they will bring down a fleet of 10,000 enemy airplanes at a distance of 250 miles..." Tesla stated that the death beam would make war impossible by offering every country an "invisible Chinese wall."

The idea was that no nation would think of attacking another one defended by a ring of particle beams. Sound familiar? He couldn’t find any financial backers or interested countries and it seems no prototype or plans for the death ray were found after his death. But science fiction has prospered on the concept and the idea of preserving peace through overpowering defensive weaponry continue to challenge scientists.

As for Twain, no less than Hemingway and Faulkner called him the “father,” as it were, of modern American literature, the man who gave voice to a nation and challenged it to deal with its prejudices, All with great humor. So yes, Beth, English teacher that you are, even though he died in 1910, Twain’s thinking had a profound influence after his death (earlier reports of which were “greatly exaggerated”) and continues to do so.

Some other suggestions from readers:

-- Jim Bridges (who gets the award for answering from the farthest distance: Australia! Wow, Jim, that’s dedication.): “While you listed a few names I puzzled over, I noticed no musicians in your list of thinkers. I would add either Billie Holiday (birth name of Eleanora Fagan) or The Beatles (counting them as one), both of whom made significant contributions to contemporary music.” A maybe on the Beatles, Jim.

-- Tim Shannon (one of the guys who started this): “I agree with most of your list. I would add Ken Wilber, Vivekananda, Bob Dylan and Thomas Merton as candidates.” Hmmm, Dylan?

That’s it for now in Social Studies 2010. I haven’t begun to whittle to 20 and I welcome new suggestions or comments on what we have (original list below). I have noticed that I have no presidents or military leaders on my list, perhaps because, while they may have been influential, it was not necessarily their own thinking that made them so. This effort has proven to be somewhat interesting and educational for me and I can‘t figure out the stock market, so I will not give it up yet. However, to maintain touch with reality I will also continue reading the autobiography of Jim Murray, one of the great (and influential sports writers) of the 20th century.

I already see some candidates for Triple A ball.