Fentanyl: From blessing to curse 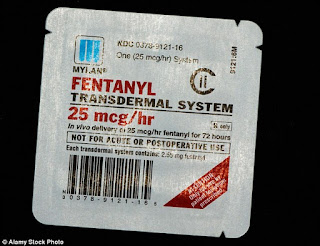 The word strikes fear into everyone involved in fighting America’s epidemic of opioid overdoses. It was approved for medical use 50 years ago as a potent pain killer. Today, it is increasingly thought of simply as a killer.
In January, in a five-day period, there were five overdose deaths in Orange County, N.Y.. Fentanyl was involved in each one. In the past couple of years, drug dealers have taken to adding fentanyl or analogues of it to the heroin they sell, making it many times more powerful and dangerous, since their customers don’t know it’s in the mix. Fentanyl is used orally, smoked, snorted, or injected. It can be hundreds of times more powerful than street drugs. The synthetic opioid was cited as the cause of 20,100 deaths in the United States in 2016, more than any other pain killer or heroin.
David Hoovler, Orange County district attorney, says 88 people died in Orange County from confirmed or suspected opioid overdoses last year. Performers Prince and Tom Petty are both said to have died from accidental overdoses of pain medications that included fentanyl.
While the White House has declared an opioid emergency in the country, it has devoted little time, money and energy to fighting it thus far. That makes it incumbent on citizens frightened at the rising death toll, especially among young people, to do their part in turning the tide. That effort always starts with information and truth is, despite its frequent appearance in headlines, social media and in TV reports, a lot of people don’t know much, if anything, about fentanyl. Consider this a basic introduction to the killer pain killer.
In its prescription form, fentanyl is known by such names as Actiq, Duragesic, and Sublimaze. Street names for fentanyl or for fentanyl-laced heroin include Apache, China Girl, China White, Dance Fever, Friend, Goodfella, Jackpot, Murder 8, TNT, and Tango and Cash.

According to the National Institute on Drug Abuse, common signs that someone is abusing fentanyl include:

Long-term fentanyl use can produce several adverse effects beyond the symptoms listed. They include:
And of course, when combined with other street drugs like heroin, fentanyl can cause respiratory distress, coma or death.
The latter is something with which America has become all-too-familiar. Even here, though, there is help. According to the Substance Abuse and Mental Health Services Administration, “The evidence is strong for the use of naloxone to reverse the effects of an opioid overdose. Distributing naloxone and teaching people to use it is an effective means of preventing deaths among people who misuse heroin, fentanyl, prescription opioids, and other opioids. With brief training, most adults can learn to administer life-saving naloxone.”
If you are interested in starting a naloxone program, need to find out how to obtain naloxone to prevent overdoses, or simply want more information, SAMSHA’s Opioid Overdose Prevention Toolkit – 2016 includes sections for physicians, first responders and family members on administering naloxone. Many local organizations have already taken this step.
Finally, if you have a prescription for fentanyl or any opioid and are concerned about a young person in your household gaining access to it -- the most common way teenagers can get it -- keep it in a locked location and keep a record of how much of the prescription you have used. And by all means do not be reluctant to have that talk about drug abuse and the special risks of abusing prescription drugs.

Treatment for addiction to fentanyl should include detox supervised by a medical professional as withdrawal symptoms can be severe. The usual follow-ups -- in-patient or outpatient rehab and 12-step recovery programs -- are strongly suggested.

Earlier this month, Governor Andrew M. Cuomo announced a 30-day budget amendment to add 11 fentanyl analogs to the state controlled substances schedule to help support law enforcement efforts to stop the spread of the drug. DA Hoovler says any help for law enforcement on illegal drugs is welcome, but much more investment is also needed in prevention and treatment for all opioid abuse, including ongoing anti-drug programs in schools and treatment on demand for addicts. Those who want help should be able to get it. If enough people demand it, perhaps the White House will hear.
*  *  *